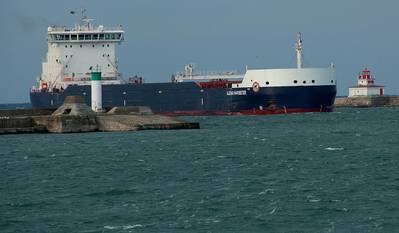 As ongoing commodity price pressures continued to impact overall tonnage volumes through the St. Lawrence Seaway in September, the shipping industry was buoyed by a number of investments in recent weeks by ship operators and ports, according to the Chamber of Marine Commerce, an association representing Canadian and American marine industry stakeholders.

“Despite slower iron ore and coal, growth continues on the Seaway in shipments for domestic sectors like construction, salt mining, agriculture and manufacturing,” said Stephen Brooks, President of the Chamber of Marine Commerce. “Strength in these sectors along with the investments we’ve seen in recent weeks are testament to the vitality of Great Lakes-Seaway shipping.”

Two weeks ago, the Port of Monroe secured a $3 million loan for improvements that will accommodate larger vessels with increased shipping capacity. McKeil Marine, a tug and barge operator whose vessels operate between Canada and the U.S., recently added a bulker ship to the fleet for its customers throughout the Great Lakes and to the east coast of Canada.

St. Catharines-based Algoma Central Corporation reaffirmed its commitment to renew its fleet in September by signing a conditional contract to build three new Seaway-max 740-ft self-unloading ships with a Croatian shipyard, replacing contracts with another shipyard that were cancelled earlier this year. This is on top of an earlier order for two 650-ft vessels.

Wayne Smith, Senior Vice-President, Commercial, Algoma Central Corporation said, “These latest ships will have all the environmental advances and efficiencies of our new Equinox-class and are essential to supporting the competitiveness of our industry and our customers. Algoma is continuing discussions with other parties on further fleet renewal opportunities."

Lower Lakes Towing Ltd., which transports bulk cargo to Canadian and U.S. Great Lakes ports, also took delivery of its newest Canadian self-unloading vessel in China. The M/V Manitoulin will have the largest carrying capacity of any existing river class self-unloader and is expected to be the most efficient vessel of its class on the Great Lakes. The new addition increases the size of Lower Lakes' fleet to 16, including 10 Canadian-flagged and six U.S.-flagged vessels, and supports recent new long-term business that the company has been awarded.

“This vessel is the first new river class self-unloader to be introduced into Great Lakes service in over 40 years,” commented Scott Bravener, President of Lower Lakes Towing. “This additional capacity reaffirms the company’s commitment to support the growth of its customers. When the Manitoulin arrives in November, it will immediately start carrying limestone to various ports within the Great Lakes / St. Lawrence Seaway system to support the construction industry, which has been a strong sector for us this season.”

According to figures from the St. Lawrence Seaway, dry bulk shipments from April 2 to September 30, including road salt from mines and construction materials, remained strong tallying 6.5 million metric tons, up 8 percent over the same period in 2014. Shipments of oversized machinery and components (other general cargo) for the season is also up 55 percent. The Port of Milwaukee continues that trend this month with a barge carrying six large rotating kiln pieces via the Seaway to Quebec to be used in cement manufacturing.

Joe Cappel, VP of Business Development for the Toledo-Lucas County Port Authority, added, “Project cargo shipments continued throughout September and into October for area refineries and in support of a new natural gas fired electric plant under construction in Oregon, Ohio. Several terminals brought in additional loads of salt in preparation for the winter months while pig iron, petcoke and other bulk commodities moved briskly through Toledo's terminals.”

However, a 15 percent decline in shipments of iron ore and a 40 percent decrease in coal shipments continued to drag down overall cargo tonnage on the Seaway. Overall cargo shipments from April 2 to September 30 totaled 22 million metric tons, down 12 percent from the same period in 2014.