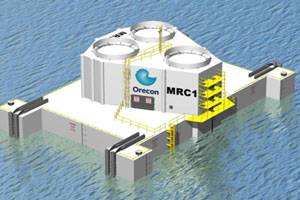 Wave energy developer Orecon, based in the South West of England, has hit stormy waters. CEO David Crisp said “I thought that after years of struggling for funding we had weathered the worst that the financial markets could throw at us. I was wrong. Earlier this year our venture capital funders withdrew their support, ironically since then we have won through to the final round of the £22m MRPF grant scheme (worth up to £6m), Carbon Trust Ventures have given their support to match fund third party investors and our UK and US patents have been granted. We now find ourselves in urgent need of new investment. Whilst we recognise the difficult economic times it is vital that industry now steps up its involvement, there is a huge commercial opportunity here for someone willing to step in now. We have the design, the site, full government support and a crack team, but time is short. Without investment we will have to close the doors at the end of January.”

While the government has been much criticized for failing the marine energy industry through lack of appropriate funding, newly formed DECC has recognized the importance of marine renewables and is rapidly taking steps to remedy the situation. The $36.2m Marine Renewables Proving Fund (MRPF) announced in September this year fills a funding gap that existed for companies wanting to deploy a first prototype. The Marine Action Plan now being executed in partnership with industry is taking a broad look at the situation to identify what government can do to help.

Since securing venture capital funding in Feb 2008 the Orecon project has built a team of 10 experienced marine engineers to continue the development of the technology to its current level. The MRC design is now complete and a shipyard has been selected to begin construction in the New Year. Orecon has secured a berth at the South West RDA’s Wave Hub facility enabling installation of the first MRC in 2011.

Orecon has won awards from the Carbon Trust, DTI, SWRDA and BERR. Orecon’s Multi Resonant Chamber (MRC) 1.5MW device uses Oscillating Water Column (OWC) principles and is recognized by utilities as showing true potential as a commercial scale device that is both simple and able to provide high yields and reliability.

Orecon has signed an agreement to supply Portuguese developer Eneolica with three MRC units which comes into effect once the first device has been deployed and Copenhagen next month is expected to put governments under even more pressure to find alternative energy solutions. According to the World Energy Council just 0.2% of the energy contained in the oceans could power the entire world and the sites off Cornwall and Portugal are among those with the best potential.