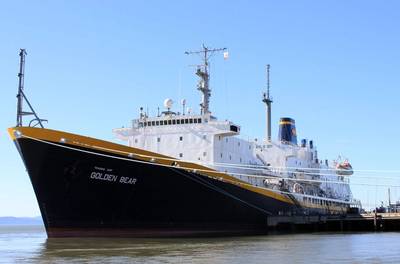 Two years after Cal Maritime became the first U.S. maritime academy and training ship to be certified for the International Maritime Safety Management Code, cadets at the academy are seeing the benefits.
“The most compelling part of this story is how the cadets have so quickly adapted to the ship’s Safety Management System (SMS),” said Harry Bolton, captain of Cal Maritime’s training ship Golden Bear. “Prior to any work being done aboard the ship, the cadets – with direction from the faculty supervisor – fill out a Job Safety Analysis (JSA) form, going over every safety detail of the job they are about to start. This brings the element of safety awareness and ownership to the cadets.”
The cadets also have a voice in the SMS. If they see what they think is an unsafe practice or situation, they can fill out a Safety Observation (SO) form. If needed, the forms can lead to corrective action that takes place immediately. Monthly safety meetings attended by administration, campus facilities, shipboard personnel, waterfront management, faculty and cadets include reviews of all the submitted SO forms.
“People seem to understand that safety is the first priority and that everyone has the authority to say something and stop a job if necessary,” said Jeff Harcq, senior Marine Transportation major and cadet chief mate of the training ship.
“Captain Bolton and the entire crew of the training ship worked extremely hard to implement ISM on our campus and ship,” said Franz Lozano, vice president for administration and finance and the ISM designated person ashore who serves as the link between the Training Ship and the shore-side support departments at Cal Maritime. “The work that everyone has put in to implement this system greatly benefits our cadets, who will now be trained on the international safety requirements they’ll be expected to meet once they graduate and begin work in the maritime industry.”
“I was here when we first received the certification, and I’ve noticed a significant change in the attitude towards safety on campus, particularly on the ship,” said Harcq. “It is embraced by instructors and cadets alike.”
“This certification is crucial in the development of a campus and shipboard safety culture,” said Bolton. “This safety-conscious environment is the foundation on which all U.S. maritime companies are built. Our cadets are now going out on their commercial cruises with a full understanding of a safety management system. The reaction from our industry partners has been positive and supportive.”
“When I went on my commercial cruise, I saw just what an ISM program is supposed to be and how it is supposed to work – and work it did,” said Harcq. “When I returned to campus the following year, I realized that the training ship uses all of the same programs and policies. As an upper class cadet, I began to lead in the best way that I could to help prepare others for what was expected within industry. Once people understood expectations, they willingly participated. It is a crucial part of our shipboard training in preparation for a career at sea.”
“We’re very proud to have become the first U.S. maritime academy to achieve this milestone,” said Cal Maritime President Tom Cropper. “It requires constant vigilance and commitment by everyone on campus to maintain a strong safety standard.”
In December of 2013, Cal Maritime became the first U.S. Maritime Academy and training ship to be certified by the American Bureau of Shipping (ABS) for the International Maritime Safety Management Code. During August of 2014, auditors from ABS issued a full Document of Compliance (DOC) to Cal Maritime and a full Safety Management Certificate to the training ship Golden Bear.  In April of 2015 while the training ship was transitioning from Reduced Operational Status to Full Operational Status for their annual summer training cruises, ABS auditors renewed the full Safety Management Certificate and Cal Maritime’s full DOC was renewed in November.
The International Convention for the Safety of Life at Sea (SOLAS) first adopted the ISM code in 1994, requiring full implementation over the next several years. Under the code, each ISM compliant ship is audited, first internally and then each two-and-a-half to three years by the flag state marine administration to verify the fulfillment and effectiveness of its safety management system.  Given the unique status of the T.S. Golden Bear, these audits take place every year just prior to departing on the summer training cruise.

Kongsberg Maritime announced an integrated strategy to deliver remote, targeted training for its customers. Providing this…