Italy, France Give Up On Fincantieri-Chantiers Deal 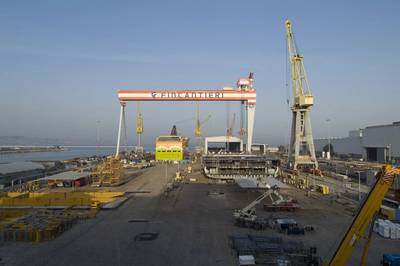 Rome and Paris agreed on Wednesday that a proposed combination of Italian shipbuilder Fincantieri and French rival Chantiers de l'Atlantique no longer made sense in the current economic environment.

State-owned Fincantieri's bid to take over its French peer, also owned by the state, collapsed three years after it was announced, thwarted by competition issues and the COVID-19 crisis.

The agreement is due to expire on Jan. 31 and will not be extended, the Italian industry ministry and the French finance ministry said in a joint statement.

"The tourism sector is currently facing an unprecedented level of economic uncertainty, due to the COVID-19 crisis which does not allow the operation to continue," they said.

Italy and France said bilateral ties remained strong and they were fully committed to deepening their cooperation in the maritime and shipbuilding sector.

The Fincantieri-Chantiers deal, clinched in February 2018, was expected to broaden the alliance between the naval industries of the two nations.

However, its completion was delayed by concerns by the European Commission that the merger of two global leaders in an already concentrated market could increase prices for cruise ships.

The EU Antitrust suspended its investigation in March and asked the parties for more information to assess the impact of the coronavirus crisis.

The European Commission has not closed the procedure due to the lack of visibility on the recovery of the shipbuilding market, the statement said.

The French state said in the statement that it would remain the main shareholder in Chantiers de l'Atlantique and support the company for as long as the crisis lasted.