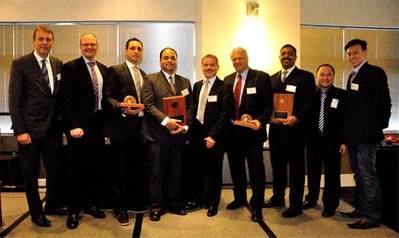 In a recent ceremony Predrag Berlafa, 'Maersk Completer' Rig Manager, was pleasantly surprised to receive Shell’s international 'Jack-up of the Year' award for the second time in a row.

Maersk Completer’s award was achieved despite having to provide personnel for Maersk Drilling’s coming eight new-buildings that will be launched within the next couple of years. A large number of personnel having been transferred from the existing crew: 20% of the senior staff has already moved and another 23% are being re-assigned in the next 3 months.

This exercise however, has made room for internal promotions on the rig to the benefit of the crew. “By promoting just over 25% of those remaining onboard as replacements for those moving on; we aim to retain the competent experience and continuity that we have built over the last 5 years,” explains Predrag Berlafa.

He continues: “With the help of the committed crew members and the rig team, as well as the willing help from our customer, Brunei Shell Petroleum, there is no doubt that Maersk Completer will rise to the challenge.”