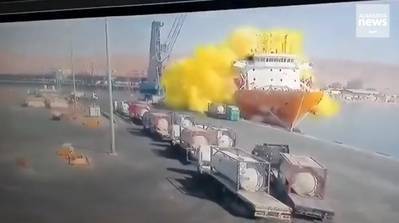 Jordan on Sunday dismissed senior officials at the country's main Red Sea port of Aqaba port after finding gross negligence was behind the deaths of thirteen people following a chlorine gas leak at a major berth.

The deaths and injury of over 300 workers came after a crane loading chlorine containers onto a ship last Monday dropped one onto the quay, causing it to explode.

Jordan's cabinet took the decision to fire the director general of state-owned Aqaba Company for Ports Operation & Management and other port officials after an investigation showed "negligence and major deficiencies" in safety protocols, Prime Minister Bisher al Khasawneh said in a Twitter post.

At a press conference on Sunday, Interior Minister Mazin al Farrayeh said the results of the investigation, which began shortly after the incident and includes the testimony of more than 120 people, would be handed over to the public prosecutor.

"The necessary measures for general safety in handling such dangerous hazardous materials were not taken," Farrayeh said, adding he expected those responsible to be put on trial.

Earlier the port came to a near standstill after hundreds of workers stayed at home to demand better industrial safety measures.

Unionists said the latest cabinet steps met some of their demands, but that no final decision had been taken to call off further protests, part of a string of demonstrations since the incident that included sit-ins in front of government offices.

Industry experts said the incident could have turned into a catastrophe had dozens of workers ending a shift not left the site shortly before the leak. Winds also blew the toxic gas away from populated areas in the port city to the outlying desert.

The leak is the second major scandal to have hit Prime Minister Bisher al Khasawneh's government in recent years after at least seven patients died last year when oxygen ran out of a public hospital.

Aqaba port at the north end of the Red Sea has long been a major transit route for Iraqi cargo, but has also become a gateway for some goods destined to Syria and the Palestinian territories.