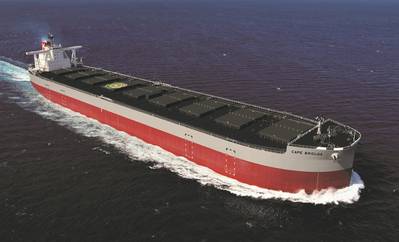 The newbuild will carry iron ore and coal for JFE Steel Corporation under a long-term consecutive voyage charter contract.

According to “K” Line, the vessel features Japan Marine United Corporation's Super Stream Duct, SURF-BULB and ALV-Fin energy-saving propulsion devices, installed near the propeller to reduce fuel consumption, as well as the LEADGE-BOW shape to reduce resistance from waves on the bow.

Additionally, a specific corrosion-resistant steel (JFE-SIP-CC) for coal developed by JFE Steel Corporation has been adopted in the vessel's cargo holds to improve resistance toward corrosion.