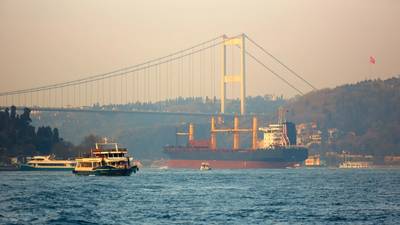 Turkish President Tayyip Erdogan on Saturday launched a $15 billion canal project intended to relieve pressure on the busy Bosphorus Strait by laying the foundations of a bridge over the planned route.

Critics of what Erdogan dubbed his "crazy project" when he revealed it a decade ago question the viability of a waterway running 45 km (28 miles) through marshland and farms on the western edge of Istanbul, and say it will damage the environment.

"We view Kanal Istanbul as a project to save Istanbul's future," Erdogan told a ceremony. "We are opening a new page in the history of Turkey's development."

Construction workers poured cement into the foundations of the 1.6 km bridge as a crowd waved Turkish flags. Erdogan said the canal would take six years to complete.

The government says it is increasingly hazardous for tankers to wind their way between the Black Sea and the Sea of Marmara down the congested Bosphorus, which divides the European and Asian halves of Istanbul, a city of 15 million people.

Already 43,000 ships pass through every year, far more than the 25,000 the government considers safe, causing longer and longer waiting times. By 2050, it is estimated that number will rise to 78,000.

Nevertheless, a survey suggests most citizens oppose the project, as does Istanbul Mayor Ekrem Imamoglu and the opposition CHP party, to which he belongs. Critics say it would destroy a marine ecosystem and endanger some of the city's fresh water supply.

Senior bankers told Reuters in April that some of Turkey's biggest banks were reluctant to finance the canal due to environmental concerns and the investment risks.

Russia is also concerned that the canal might not be covered by the 1936 Montreux Convention, which restricts the passage of non-Black Sea states' warships through the Bosphorus.

Imamoglu had dismissed Saturday's ceremony as a face-saving stunt for a project that has been slow to materialize, partly due to economic difficulties. He said the bridge was part of a highway project unrelated to the canal.