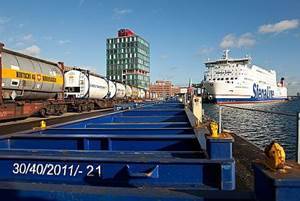 The Port of Kiel is getting an additional direct intermodal train service. From February 3, 2014, a complete block train will operate three times a week in both directions between the Port of Kiel and Duisburg.

The trains are 490 meters long which means that 24 slots will be available per departure for loadable trailers or 48 slots for containers and swap-bodies. The train will be operated by Kombiverkehr KG, Frankfurt, which will serve both Kiel’s Schwedenkai Terminal and Ostuferhafen. The travel time from there to the DUSS Terminal in Duisburg-Ruhrort will be about eight hours. The trains from Kiel will run on Mondays, Wednesdays and Fridays while those from Duisburg will run on Tuesdays, Thursdays and Saturdays. Arrival and departure times are being dovetailed with ferry time-tables in the Port of Kiel and a detailed new time-table is being published at the start of the New Year.

Dr. Dirk Claus, Managing Director of the Port of Kiel (SEEHAFEN KIEL GmbH & Co. KG) said, “This shuttle train service is a further building block in our port’s hinterland links. It means that Kiel can now be reached even faster and, for the first time, directly by rail from the Ruhr.”

“With this new direct train link and the direct link between Kiel and Verona established last year we are acknowledging the growing significance of the Port of Kiel in Baltic transport,” said Peter Dannewitz, Head of Sales at Kombiverkehr KG. “The direct link with Duisburg further increases our transport capacity and also relieves the daily intermodal rail shuttle service between Kiel and Hamburg-Billwerder, with its connections to many national Kombiverkehr destinations.”

Along with Baltic and Scandinavian transit traffic, the terminals in Kiel will also handle local freight consignments. The catchment area will be central and western Schleswig-Holstein including the German-Danish border region. In this way the new block train service is also making a contribution to efforts to relocate goods traffic from the roads onto eco-friendly rail services: CO2 waste gas emissions per consignment on the Kiel-Duisburg rail link will be up to 750 kilos lower than on a comparable standard truck journey. It is the aim of the Port of Kiel to transport an additional 5,000 consignments from Kiel by rail in the coming year.

From January carriers and forwarders will also benefit from ferry-oriented travel time improvements on the Kiel-Verona direct rail link. Because of an optimized time-table, consignments arriving in Italy can be collected 11 hours earlier than previously. Instead of a Friday collection at 1,300, containers, swap bodies and semitrailers will be available at the train in Verona during the night at 0200. As a result, deliveries which in most cases could only be carried out after the weekend will now be possible on the same day throughout Upper Italy.

While there are many layers to the continued container shipping supply chain woes, and the U.S. Federal Maritime Commission…