Lack of Monitoring at Anchor Led to $16.9 Million Accident -NTSB 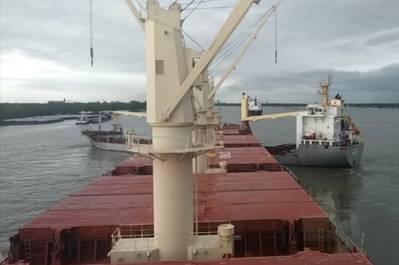 Image from video taken at 1701 from the bridge of the Atlantic Venus with the Nomadic Milde lying against its bow. (Source: Atlantic Venus crewmember / NTSB)

A bridge team’s lack of effective monitoring of their position while at anchor led to a cargo ship colliding with an anchored bulk carrier and striking a chemical dock on the Lower Mississippi River near New Orleans, according to a National Transportation Safety Board Marine Accident Brief released Thursday.

Marine Accident Brief 21/15 details the NTSB’s investigation of the May 8, 2020, collision of the anchored general cargo ship Nomadic Milde with the anchored bulk carrier Atlantic Venus. The Nomadic Milde then struck a nearby chemical dock and grounded on the bank. The accident resulted in about $16.9 million in damages. There were no injuries.

The Nomadic Milde anchored in the Lower Mississippi River just upriver of the Atlantic Venus during high water conditions. After setting the starboard and port anchors, the vessel’s positions and headings suggest that the ship did not hold in its original anchor position and likely dragged towards the bank while the ship’s pilot was departing the ship. It then dragged for a second time downriver and closer to the Atlantic Venus, to about half the original distance between the two vessels.

In its report, NTSB said there was no evidence of either watch officer of the Nomadic Milde checking the ship’s position at frequent intervals or by means other than the electronic chart and information display system (ECDIS) watch alarm to determine if the ship was secure at anchor. According to NTSB, there was sufficient evidence to alert the bridge team that the Nomadic Milde was not holding well, and had this been detected, the master could have been alerted earlier. This would have allowed for sufficient time to undertake necessary measures to address the problem.

The NTSB determined the probable cause of the collision was the bridge team on the Nomadic Milde not effectively monitoring the vessel’s position, and therefore not detecting that the vessel was dragging anchor and had moved from its original position during high water conditions in proximity to other vessels.

“Monitoring a ship at anchor, especially in an area where the risks of nearby hazards and weather and current are present, requires a continuous state of vigilance and the use of all available means to determine whether a vessel is dragging or not,” the report said. “Although ECDIS is a useful tool in determining a ship’s position at anchor, the ship’s radars would have provided information for the crew to determine or crosscheck if the range to a vessel or object had decreased, or if the ship had moved while at anchor.”