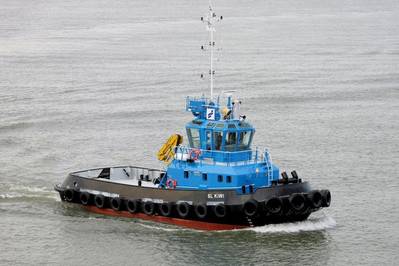 Built at Damen’s facilities in Gorinchem, the Netherlands, the SL Kiwi left Rotterdam on board a Heavy Lift vessel by Christmas 2013. From Smit Lamnalco’s perspective the short lead time was important.

“Although short lead times naturally are one key element in our standard design USP, the vessel does have a number of client-specific features, such as an open stern with removable bulwark top plate and Smit Lamnalco corporate colors,” said Jan de Vente project manager for tug newbuilds at the Damen Shipyards Gorinchem head office. “In addition, various options from our ‘catalog of OEM extras,’ such as a deck crane and fuel oil separator unit, were selected too.”

Like its sister ship, the SL Kiwi will to a large extent be deployed in marine services to the oil and gas terminal industry, including diving support. Hence the various extras. The Stu 2208 type vessels were dominantly designed for towage and harbor mooring assistance.