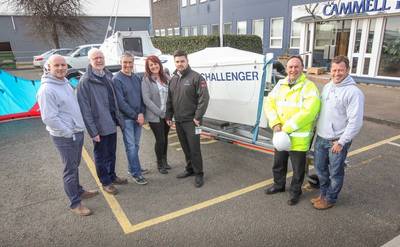 Merseyside shipyard and engineering company Cammell Laird held a special ceremony to launch a unique kite boat designed to raise funds for charity Claire House Children’s Hospice.
The ‘CL Challenger’ was designed by retired shipyard naval architect Bill Owen incorporating a kite as the main power source to propel the vessel. The eco-friendly vessel also generates electric power for radio, lights and GPS through batteries charged via solar panel.
It will now be used by a team of intrepid kite surfers for a range of sea-faring challenges to raise vital cash for the Bebington children’s charity.
The boat-building project was funded and completed with support from a number of firms within the local marine community.
The vessel’s main hull was built by volunteers Bill Syvret and Bill Owen with the assistance of Cammell Laird foreman shipwright Barry Wong and his team of shipwrights. During the later stages Mark Gillam of Seaking Electrical and Pyeroy painting contractors provided additional expertise.
Meanwhile, Birkenhead based MPE Interiors supplied plywood and cut out vessel frames with CNC wood cutting machines. GRE material for the tubular sponsons was supplied by Pipex, and upon completion the vessel was surveyed by Steve Roberts of SR Marine Surveyors.
The official hand-over saw crew members - Neil Gyllenship, Mike Palmer, Ben Kirkpatrick, Dean Jagger and Jayne Dixon – who were also involved in the design phase taking charge of the vessel.
They will now embark on a series of adventurous fund-raising challenges in 2017 starting with a return voyage from Liverpool to the Isle of Man.
Bill Syvret said: “We are hugely grateful for the support shown by Cammell Laird shipyard owners and directors, the input from Bill Owen, and especially the shipyard shipwright department and the team of local marine companies involved. The vessel has been built to support Claire House but now many other charities will hopefully benefit from its fundraising activities in the future.
“This has been a fascinating project and is certainly the first craft of its kind to be built at the yard. The kite boat is a "concept vessel" and a relatively new invention, in its modern form. We hope the CL Challenger will be the source of much fun, excitement and adventure for its crew, while helping raise much needed cash to support Claire House and numerous other worthy causes.”
Cammell Laird actively engages with many charitable organisations every year. It has built longstanding relationships with a number of local charities including Claire House and Zoe’s Place Baby Hospice. It further supports youth charity Fairbridge, which became part of the Princes Trust in 2011. One of the yard’s traditional annual fundraisers sees workers, management and subcontractors joining forces to gather money for local children’s hospices each Christmas.