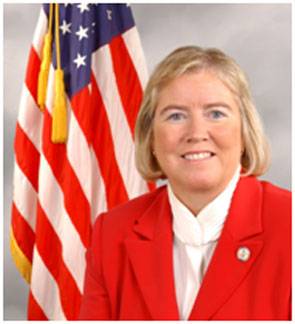 A commitment to ending the dredging crisis on the Great Lakes has earned Congresswoman Candice Miller (R-MI) an award as 2011 Great Lakes Legislator of the Year from the largest labor/management coalition representing workers and industries dependent on shipping on America’s Fourth Sea Coast.  Rep. Miller, who represents Michigan’s 10th District in the House of Representatives, will formally receive the award from Great Lakes Maritime Task orce (“GLMTF”) in Washington on February 9.

“Congresswoman Miller has twice co-sponsored legislation that requires the government to take the tax dollars it collects for dredging and spend the full amount on keeping our nation’s waterways open to commerce,” said John D. Baker, President of Great Lakes Maritime Task Force in 2011.  “The Harbor Maintenance Trust Fund has a surplus of $5.65 billion because the government only spends about $750 million a year on dredging deep-draft ports and waterways.  As a result, vessels working the Great Lakes often forfeit as much as 10 percent of their carrying capacity each trip.”

Baker, who is also President Emeritus of the ILA’s Great Lakes District Council, stressed that Rep. Miller’s co-sponsoring of H.R. 104 is good for both her district and Michigan.  “When a ship delivers a full load of low-sulfur coal to the Belle River power plant, the cargo can total 70,000 tons or more, and the electricity produced there powers many industries.  Unfortunately, because of the dredging crisis, the top cargo in 2010 was 66,000 tons.  H.R. 104 will provide the funds the U.S. Army Corps of Engineers needs to restore the Great Lakes Navigation System to functional dimensions.”

The dredging issue is but one of Rep. Miller’s ties to the Great Lakes.  She sits on two of the key maritime committees – Homeland Security and Transportation and Infrastructure, and is chairwoman of Homeland Security’s subcommittee on Border and Maritime Security.  Border security is especially important to the Congresswoman as her district includes the Blue Water Bridge which spans the St. Clair River and is the second-busiest northern border crossing.

Her maritime roots run deep.  Her family owned a marina and she is an accomplished sailor.  Her district in the “thumb” area includes considerable shoreline, as well as numerous bays, lakes and rivers, not to mention a several docks that receive coal and limestone from U.S. and Canadian-flag lakers.

Rep. Miller’s support for adequate U.S. Coast Guard icebreaking resources was another factor in her selection as Great Lakes Legislator of the Year.  “The Detroit and St. Clair rivers are major arteries in the system, but without sufficient icebreaking resources, can become clogged with wind-blown ice,” said Gene Caldwell, 1st Vice President of GLMTF.  “Congresswoman Miller knows those cargos that move in ice can mean the difference between a steel mill or power plant maintaining employment during the winter closure.”

Caldwell, who is also Vice President and General Manager of Bay Shipbuilding Company, noted that although many U.S.-flag Great Lakes freighters have ice strengthened bows, even the most powerful vessels can become beset in ice.  “U.S.-flag lakers would not be able to move 15 million tons of cargo or more during the ice season without adequate U.S. and Canadian Coast Guard icebreakers.”

Congresswoman Miller also backs construction of a second Poe-sized Lock at Sault Ste. Marie, Michigan.  “The Soo Locks are the single point of failure that could bring waterborne commerce on the Fourth Sea Coast to a virtual standstill,” said Don Cree, 2nd Vice President of GLMTF.  “A closure of the Poe Lock would idle 70 percent of U.S.-flag carrying capacity,” said Cree, who also serves as Great Lakes Special Assistant to the National President of for American Maritime Officers.  “Congresswoman Miller finds this risk intolerable and has pledged her support for efforts to twin the Poe Lock.”

GLMTF’s award also recognizes Rep. Miller’s support for a U.S. maritime policy that creates and sustains jobs and promotes national security.  “For nearly 200 years America has required that domestic waterborne commerce be conducted in vessels that are U.S.-owned, U.S.-built, and U.S.-crewed, “said James H.I. Weakley, 3rd Vice President of GLMTF.  “The U.S.-flag Great Lakes fleet employs more than 1,600 men and women and annually provides $125 million in wages and benefits.  The Great Lakes shipyards that build and maintain these vessels have more than 1,200 employees.  America is more secure because domestic waterborne commerce is still an American industry.”

Founded in 1992, Great Lakes Maritime Task Force promotes domestic and international shipping on the Great Lakes.  With 82 members, it is the largest coalition to ever speak for the Great Lakes shipping community and draws its membership from both labor and management representing U.S.-flag vessel operators, shipboard and longshore unions, port authorities, cargo shippers, terminal operators, shipyards and other Great Lakes interests.