Liebherr to Deliver RTGs to Mayotte and Manila 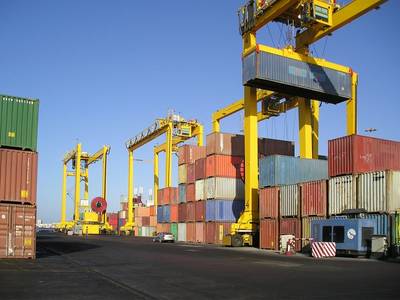 DPWorld Asian Terminals Inc. has placed an order with Liebherr Container Cranes for a further 5 RTGs at its Manila facility. The RTGs follow on from an order of two units that were commissioned earlier in 2014 at the port.

The 8 wheeler RTGs stack 1 over 6 high-cube containers, have a safe working load of 41 tonnes under spreader and span six containers wide and a truck lane. The machines benefit from Liebherr’s unique 8 rope reeving no-sway system and simultaneous motion of all drives allowing the RTG to attain productivity levels of up to 40 % greater than alternative models.

Liebherr Container Cranes have recently secured a contract for the delivery of 4 Electric RTGs to the Port of Longoni in Mayotte. The Cranes which are due for delivery in 2015 are capable of working seven stacks wide and a truck lane and can stack 1 over 5 high and have 4 wheels per corner. The cranes feature dual power with a cable reeling drum complemented by a diesel genset, allowing the port the flexibility to choose power supply depending on operational requirements. These are the first Liebherr RTGs to be delivered to Mayotte, a French department consisting of a number of Islands located between Mozambique and Madagascar.

Liebherr is also shipping 8 Electric RTGs to Porto Chibatão, Manaus, Brazil, a major port at the confluence of the Amazon and Rio Negro rivers. The RTGs are supplied with a cable reeling drum and diesel genset and have the option to operate either fully electric or with diesel power. The machines work stacks of up to 8 containers wide and six high and have a safe working load of 40.6 t. The RTG’s join the existing fleet of six RTGs and nine fixed Liebherr Cargo Cranes at the port.