Lines in the Water 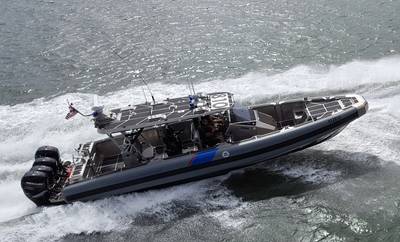 There are a variety of jurisdictional lines in the water. The first line to be considered is the national boundary between two adjacent or nearby countries. Adjacent countries tend to draw agreed boundaries extending their shoreside boundaries, with accommodations for headlands, capes, etc. Most national boundaries have been agreed upon long ago. A few, though, are not officially resolved. Somewhat surprisingly, of the four marine boundaries between Canada and the U.S., three are still in dispute.

The baseline is probably the most significant boundary encountered by a mariner, although few appreciate its existence. The baseline is generally drawn through the low water line along the coast. A nation may draw a straight baseline where the coast is deeply indented, as by a bay, or along the outer edges of a fringe of islands that lie just offshore from the mainland. The straight baseline rule can get more complicated in certain situations beyond the scope of this overview. Baselines are important, though, because once a ship passes inside the baseline it becomes subject to the full panoply of the laws and regulations of that nation. All waters inside the baseline are the internal waters of that nation. The baseline is also used as the starting point for measuring the width of almost all other jurisdictional boundaries seaward of that line.

Moving seaward from the baseline, one encounters the outer limit of the territorial sea. In accordance with the United Nations Convention on the High Seas (UNCLOS), a coastal nation has the right to establish the breadth of its territorial sea up to a limit not exceeding twelve nautical miles from a properly established baseline. Most coastal nations have claimed, and enforce, territorial seas out to the full extent authorized by UNCLOS. An outlier is the U.S., which has two different territorial seas.

In simpler times, the U.S. had only one territorial sea, which was all things to all people. The nation had, with reasonable consistency, claimed a territorial sea three nautical miles in breadth since its founding in 1789. Within the territorial sea, being under the full sovereignty (except for the right of innocent passage) of the U.S., all U.S. laws are enforced, as well as those of the adjacent coastal state of the U.S. The territorial sea and the internal waters comprise the navigable waters of the U.S.

This changed in 1988, when President Reagan, in response to the increasing threats posed by Soviet spy ships hovering off the U.S. coast, proclaimed a 12 nautical mile territorial sea. The proclamation specifically limited its application to international law. The Proclamation left undisturbed the three nautical mile territorial sea for all domestic purposes, including law enforcement. Thus, the Proclamation’s only real effect was to require the spy ships to move further offshore. The Proclamation did, though, cause a reexamination of the domestic concept of the territorial sea, resulting in a willingness to deviate from the traditional three mile rule if need be shown.

Subsequent to the Proclamation, various federal statutes have been enacted that, for the purpose of that statute, have extended the territorial sea from three nautical miles out to twelve nautical miles. The first of these was the Nonindigenous Aquatic Nuisance Prevention and Control Act of 1990, which established ballast water management requirements for ships arriving in U.S. waters. This was followed by the complex and confusing Antiterrorism and Effective Death Penalty Act of 1996. This 1996 legislation made the extended territorial sea subject to U.S. sovereignty for purposes of most federal criminal law, as well as the criminal laws of adjacent states in matters where the federal criminal code is silent.

The Coast Guard Authorization Act of 1998 made various amendments to the U.S. Code with regard to the territorial sea and navigable waters. The Ports and Waterways Safety Act was amended to add the term navigable waters of the U.S., defined as including “all waters of the territorial sea as described in Presidential Proclamation 5928 of December 27, 1988.” The effect of this provision was to expand U.S. Coast Guard jurisdiction for purposes of vessel operating requirements, vessel traffic service (VTS) systems, safety zones, many Captain of the Port (COTP) orders, and port access routes, among other things. The legislation also added the same new term and definition to Subtitle II (Vessels and Seamen) of Title 46 (Shipping) of the U.S. Code. Since this subtitle defines Coast Guard jurisdiction over U.S. flag vessels for most purposes and over foreign flag vessels for some purposes, its impact could be equally extensive. Measures specifically covered by this expanded authority include: negligent operation, carriage of dangerous cargoes by foreign flag vessels, lightering, uninspected vessels, recreational vessels, load lines, marine casualty reporting, and federal pilotage authorization. The Vessel Bridge-to-Bridge Radiotelephone Act was amended similarly in 2002.

Over time, various needs arose which could only be efficiently dealt with by selectively asserting federal jurisdiction beyond the territorial sea. A contiguous zone out to 12 nautical miles allowed for the enforcement of customs, sanitation, fiscal, and immigration laws. In 1999, the U.S. contiguous zone, like that of many other nations, was extended to 24 nautical miles seaward of the baseline. In 1945, with offshore oil and gas drilling becoming more productive, President Truman asserted jurisdiction over the economic resources of the continental shelf off the U.S. coast. The continental shelf is now defined as comprising the sea-bed and subsoil of the submarine areas that extend beyond the territorial sea throughout the natural prolongation of the land territory to the outer edge of continental margin or to a distance of 200 nautical miles from the baseline, whichever is longer.

With the increasing efficiency of fishing techniques, depletion of the living resources of the sea became an issue. The U.S., not unlike other nations, tried a combination of limited unilateral control and multilateral cooperation, but to little effect. Eventually, the U.S. joined the increasing number of nations claiming an exclusive fisheries zone, now called an exclusive economic zone (or EEZ) extending 200 miles offshore. Various federal water pollution laws were also extended to cover the same area. None of these claims, though, attempted to assert general U.S. sovereignty beyond the traditional three nautical miles, even though an increasing number of nations were claiming territorial seas of four, six, 12, and 200 miles.

There are two outliers – jurisdictional lines in the water that are not directly related to any of the lines discussed above. The demarcation lines have been established by the U.S. Coast Guard dividing the high seas from harbors, rivers, and other inland waters of the U.S. for the purpose of determining the applicability of special navigation rules (i.e., the Inland Rules) in lieu of the International Regulations for Preventing Collisions at Sea (COLREGS). The demarcation lines are generally, but not always, consistent with the baselines of the U.S. The boundary lines are applicable to a grab-bag of federal statutes.These statutes include: 33 USC 152 relating to the length of towing hawsers; 46 USC 5102(b)(6) which exempts from load line requirements certain vessels on domestic voyages; 46 USC 3301(6) requiring the inspection of seagoing barges; 46 USC 3301(7) requiring the inspection of seagoing motor vessels; 46 USC 3302(d) which exempts from inspection requirements certain vessels under 150 gross tons that operate within the waters southeastern Alaska and the State of Washington; and 46 USC 8304 implementing the Officers’ Competency Certification Convention, 1936. The boundary lines generally follow the general trend of the seaward, highwater coastlines, but with more variations than do the demarcation lines. Left untouched in this conglomeration of charge are various other jurisdictional concepts. The cabotage laws, primarily enforced by the U.S. Customs and Border Patrol (CBP), remain fixed at three nautical miles, plus the points on the continental shelf used for exploration for or extraction of natural resources. Also, the Federal Water Pollution Control Act and the Oil Pollution Act (OPA) are limited to three nautical miles. Various federal civil laws, such as the Death on the High Seas Act and the obligation to mark and remove wrecks, are still controlled by the old territorial limit of three nautical miles. Some other statutes include the terms “territorial seas” or “navigable waters” without defining their limits. Mariners, and others, will continue to be confused by the boundaries of the United States, at least for so long as it claims different territorial seas for different purposes.


The Author
Dennis L. Bryant is with Bryant’s Maritime Consulting, and a regular contributor to Maritime Reporter & Engineering News as well as online at MaritimeProfessional.com.
t: 1 352 692 5493
e: dennis.l.bryant@gmail.com