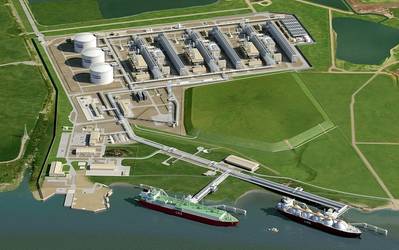 U.S. liquefied natural gas (LNG) company Cheniere Energy Inc said it planned to make a final investment decision to build the third liquefaction train at its Corpus Christi LNG export facility in Texas in the first half of 2018:

Cheniere said it will use the credit facilities to fund a portion of the costs of developing, constructing and placing into service three 0.7-billion cubic feet per day (bcfd) liquefaction trains and a related pipeline at its Corpus Christie LNG export facility, among other things.

The company is already building two liquefaction trains at Corpus Christie. One billion cubic feet is enough gas to fuel about five million U.S. homes for a day.

Cheniere said it expects to close the amended credit facilities, proceed with a final investment decision for Train 3, and issue a notice to proceed to Bechtel, the lead contractor on the Corpus Christie project, for Train 3 in the first half of 2018.

The move should keep Cheniere at the front of the pack of companies competing to build the next generation of U.S. LNG terminals to meet potential global LNG supply shortfalls in the early 2020s, analysts have said.

Cheniere's Sabine Pass project in Louisiana was the first big LNG export facility to enter service in the Lower 48 U.S. states in February 2016. The company currently has four 0.7-bcfd liquefaction trains in service at Sabine Pass and one under construction.

US LNG Exports at 20-month Low