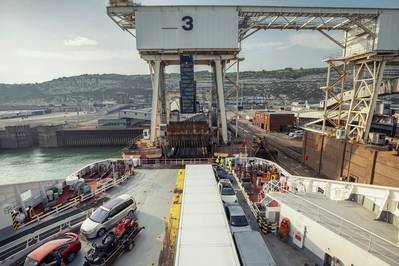 Long queues of holidaymakers and lorries built up on Saturday outside the Port of Dover, Britain's main gateway to Europe, and officials said the disruption could be worse than the logjam seen on Friday.

Travelers setting out at the start of the British school summer holidays, as well as the usual flow of goods lorries, have faced long delays because of slow border checks.

The Kent Resilience Forum, which brings together local councils and emergency services, declared a "major incident", while Port of Dover CEO Doug Bannister said travelers could face delays of up to six hours on Saturday.

The UK government has blamed the problems on a lack of French border force staff, while France says more checks are needed because Britain is no longer a member of the European Union.

Dover and the French port of Calais have what is known as juxtaposed border controls, where French authorities check passports on British soil before departure, and vice versa in France.

"We were expecting that today was going to be a busier day than yesterday," Bannister told BBC radio.

"Yesterday we processed about eight and a half thousand cars going out, today we were predicted to be around 10,000, so it is going to be a very busy day down here."

Roger Gough, the Conservative leader of Kent County Council, said around 3,000 HGV lorries held on the M20 motorway were gradually being fed through to Dover.

British Foreign Secretary Liz Truss, who is competing to succeed Boris Johnson as prime minister, said on Friday the "awful situation" was unacceptable.

"We need action from France to build up capacity at the border to limit any further disruption for British tourists and to ensure this appalling situation is avoided in future," she said in a statement.

Travelers heading for the Eurotunnel service at Folkstone were also facing delays. Queues stretched two miles (3.2 km) back from the entrance.

The major port delays come as some airports also struggle to recruit enough staff to manage the post-pandemic rebound in travel, leading to chaotic scenes at London airports in recent weeks.

Railway travel has also been periodically disrupted this summer by labor strikes.