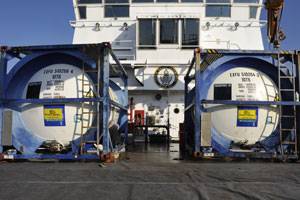 Containers filled with oil collected from the Deepwater Horizon response sit on the deck of the Coast Guard Cutter Harry Claiborne here May 23, 2010. The Harry Claiborne is able to respond to oil spills due to being equipped with a Vessel of Opportunity Skimming System. U.S. Coast Guard photo by Petty Officer 3rd Class Barry Bena. (Photo courtesy USCG)

The National Incident Commander for the BP oil spill, Admiral Thad Allen, approved the implementation of a section of Louisiana’s barrier island project proposal that could help stop oil from coming ashore and where work could be completed the fastest—as an integrated part of the federal response to the BP oil spill.

This step will save Louisiana the cost of construction for this section by integrating it with the federal government’s ongoing oil spill response—thus paving the road for payment by BP, as a responsible party, or the federal Oil Spill Liability Trust Fund.

It will also allow assessment of the effectiveness and environmental impacts of this strategy in one of the areas most at risk of long-term impact by BP's leaking oil.

“We are relentlessly working to secure the spill at source and attack the oil being released using every safe and reasonable technique available,” said Allen. “Implementing this section of the proposal will allow us to assess this strategy’s effectiveness in protecting coastal communities and habitats of the Gulf region as quickly as possible. We will not be satisfied until the spill is stopped, the oil is removed, the communities are safe, and their way of life restored.”

The Army Corps of Engineers has granted partial approval for Louisiana's barrier island project proposal, covering approximately half of the state's original request and including six sections.

Under this permit, but without coordination with Admiral Allen and the Unified Command, Louisiana is authorized to construct the barrier islands at its own expense, so long as construction meets the terms and conditions established by the Army Corps of Engineers and any other required permits are obtained. If Louisiana moves forward, they will need to address all potential costs and environmental impacts.

Admiral Allen’s recommendation would integrate a section of the project with the federal oil spill response—and therefore potential funding by BP, as a responsible party, or the federal Oil Spill Liability Trust Fund.

Based on feedback from the Interagency Solutions Working Group established under the NIC and comprised of subject matter experts from the National response Team and other federal agencies, Admiral Allen determined that his recommendation best strikes a balance between three major considerations:
•    The imperative to protect vulnerable Louisiana coastlines;
•    The need for any construction to contribute effectively to the overall response effort, which includes numerous on- and off-shore activities; and
•    The extensive time needed to implement such a strategy.

If the evaluation of the recommended section’s effectiveness and environmental impact show a net environmental benefit, additional areas may be considered by the National Incident Commander as part of the oil spill response moving forward.

Louisiana’s original proposal called for the dredging of more than 92 million cubic yards of material over a six to nine month period to build temporary barrier islands. The NIC Working Group found that implementation of the proposal in all areas approved by the Army Corps of Engineers, in the midst of an active spill, would not be prudent or provide effective protection—especially considering the complications of a major construction project occurring in the midst of a response encompassing more than 20,000 personnel and 1,300 vessels.

Since the first moments of the Deepwater BP Oil Spill, the federal government has continuously anticipated and planned for a worst case scenario, and Admiral Allen has led and coordinated an ongoing, all-hands-on-deck response to mitigate the spill, for which BP is responsible and required to pay response and cleanup costs.