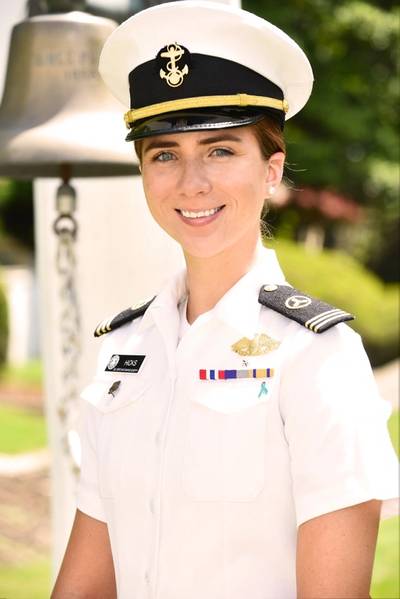 Hope Hicks is a former U.S. Merchant Maritime Academy cadet the revealed she was raped by her superior officer on board a Maersk cargo ship in 2019. (Photo courtesy Sanford Heisler Sharp)

Hicks shook the international maritime community in 2021 under the moniker "Midshipman-X" when she publicly described how she was raped by her superior officer while serving as an engine cadet aboard the Maersk cargo ship Alliance Fairfax in 2019.

Attorneys for Hicks and MLL announced the settlement on Friday and said they would not disclose details of the agreement.

“It is important to me that my case has brought greater awareness of the issue of sexual assault and harassment at sea. The leadership of MLL has expressed the need for change. The changes that MLL has proposed are an important first step, but there is still a lot of work to be done in the maritime industry,” Hicks said.

William Woodhour, CEO, Maersk Line, Limited, said, “We want to be absolutely clear that the events Ms. Hicks describes are unacceptable. No matter who and where you are, those who work with us must feel safe and protected in our work environment.”

At the same time Hicks' case was filed, a second was brought forward on behalf of another USMMA student who chose to remain anonymous as "Midshipman-Y", claiming she suffered extreme sexual harassment, unwanted touching and discrimination on the same Maersk ship as Hicks two years later.

"We are still in private discussions in an attempt to resolve that case. If a resolution is not reached, Maersk will have to answer our complaint on December 16," Christine Dunn, partner, Sanford Heisler Sharp, counsel to Midshipman Y, told MarineLink.

Hicks' public accounting of her experience led the U.S. Department of Transportation's MARAD, which oversees USMMA, to temporarily halt the Sea Year program as it worked toward improving safety measures. At-sea training has since resumed.

Meanwhile, MLL said on Friday it has initiated an internal program for training, reporting and accountability and that is working externally with industry stakeholders including industry partners, labor unions, the U.S. Maritime Administration (MARAD), the maritime academies and the U.S. Coast Guard (USCG).