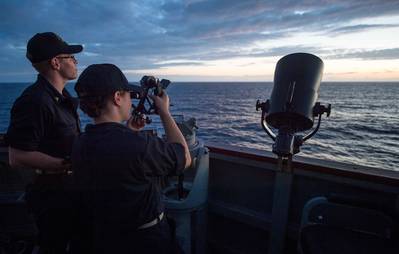 Students from the U.S. Merchant Marine Academy (USMMA) are set to resume at sea training with new safety measures in place following a temporary pause due to sexual assault and harassment concerns.

The U.S. federal maritime academy’s Sea Year training program, which typically consists of a sailing period during a cadet’s sophomore year and a longer sailing period during a cadet’s junior year, was put on hold in early November as lawmakers and the U.S. Department of Transportation (DOT) and the Maritime Administration (MARAD) grappled with reports of rape and other forms sexual misconduct against cadets training on board commercial ships. Sea Year training enables cadets to obtain the training days at sea necessary to become eligible for a U.S. Coast Guard merchant officer license examination.

On Thursday, the DOT and MARAD announced new policies and procedures will be implemented at USMMA to support cadets while they are at sea. With implementation of these standards and policies, USMMA anticipates lifting the current pause on Sea Year on December 22. The six State Maritime Academies have confirmed their support for these standards, the DOT said.

“The plan we are launching today represents the collective commitment of DOT, MARAD, USMMA and the six state maritime academies to strengthen safety for cadets aboard commercial vessels, and to support an inclusive culture that prioritizes preventing sexual assault and harassment and supporting survivors,” said Acting Maritime Administrator Lucinda Lessley. “The plan is an initial step, and all parties are committed to continuing to review this program frequently, and to make improvements whenever needed to ensure the safety and success of cadets.”

Since the pause was announced, DOT, MARAD and USMMA have conducted a detailed review of both the existing Sea Year requirements for commercial carriers as well as the policies and procedures in place at USMMA to support cadets while they are at sea. DOT, MARAD and USMMA have also sought recommendations from a wide range of stakeholders—including industry, labor, advocacy groups working to combat sexual assault and harassment, Congress and federal agencies, including the U.S. Coast Guard, as well as USMMA midshipmen and alumni—regarding actions to strengthen safety at sea for cadets.

“Safety at sea requires teamwork both aboard vessels and between the vessel and shoreside management. Workplace climates which enable sexual offenses erode trust and teamwork and put mariners’ lives at risk,” said Rear Admiral John Mauger, Coast Guard Assistant Commandant for Prevention Policy. “Sexual assault is a crime. When they happen aboard a U.S. vessel it must be reported to the Coast Guard. Coast Guard investigators will respond, and we will hold offenders accountable.”

Two documents were released today. The Every Mariner Builds a Respectful Culture (EMBARC) program, administered by MARAD, which enumerates more than 30 new safety measures that commercial carriers will be required to meet before they can be enrolled in the EMBARC program and approved to carry cadets. The EMBARC program also sets forth a process and protocols for ensuring continuous review and improvement.

The second document enumerates new policies and procedures that will be implemented at USMMA to support implementation of the EMBARC program and to increase the support provided to cadets while they are at sea. Among other new policies and procedures, USMMA will provide additional pre-Sea Year training and a satellite phone that enables cadets to have voice communication with family and friends as well as Academy personnel and other support resources while embarked at sea. USMMA has also recently implemented a new amnesty policy that ensures that survivors who report sexual assault, as well as intervening bystanders and witnesses, will not be subject to discipline for a violation of the alcohol or drug use policy occurring at or near the time of the commission of the assault.

“We fully support the Sexual Assault and Sexual Harassment (SASH) Prevention Mandatory Minimum Standards articulated in the Every Mariner Builds a Respectful Culture (EMBARC standards) for U.S. flag Safety of Life at Sea (SOLAS) vessels engaged in international trade,” stated RADM Bill Brennan, chairman of the Consortium of State Maritime Academies. “We believe these standards will help ensure a safe and healthy work environment for our cadets onboard these vessels.”