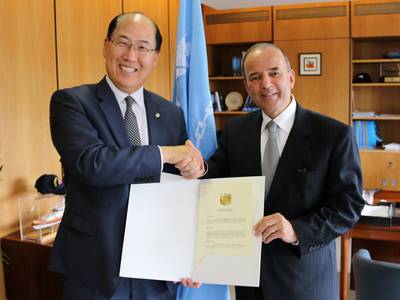 Peru has become the latest country to accede to the International Maritime Organization (IMO) Ballast Water Management Convention (BWM Convention), a treaty designed to counter the threat to marine ecosystems by potentially invasive species transported in ships’ ballast water.
On June 10, Ambassador of Peru to the United Kingdom, Claudio de la Puente Ribeyro, met IMO Secretary-General Kitack Lim at IMO headquarters in London to hand over the instrument of accession.
With the addition of Peru, the number of states that have acceded to the BWM Convention stands at 51, representing 34.87 percent of the world's merchant fleet tonnage.
Lim has reiterated his request to countries that have not already done so, to ratify the BWM Convention as soon as possible in order to establish a certain date for entry into force, which will facilitate the work to make any necessary.