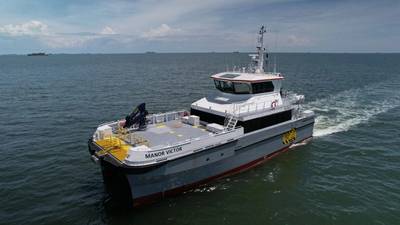 The 27.1-meter aluminum catamarans, Manor Victor and Manor Vulcan, are the first in the builder's new StratCat 27 (SC 27) range, designed in collaboration with BMT and unveiled in May 2021. CTVs are typically used to ferry personnel and light equipment to and from offshore wind farms.

An evolution of Strategic Marine's StratCat 26 design, the new StratCat 27 has been engineered to deliver a number of efficiency improvements, according to the builder.

Due to hull form optimization and propeller efficiency, the SC 27 also achieved a 15% increase in bollard push, Strategic Marine said. Other notable improvements include a 30% increase in internal volume, which has seen a significant improvement in technician comfort and quality. Each CTV has seating for up to 30 technicians and capability to safely transfer in over 1.75-meter wave heights (Hs).

While the StratCat 27 has been designed to accommodate a number of power and propulsion arrangements, MRE's newbuilds are each powered by two Caterpillar C32 1,450-horsepower engines. However, the vessels are "hybrid-ready", meaning the engine and propulsion design is such that they can be made hybrid-electric at a later date. Each vessel has 35,000 liters fuel capacity.