MARAD Seeking Comments on the Future of Nuclear Ship Savannah 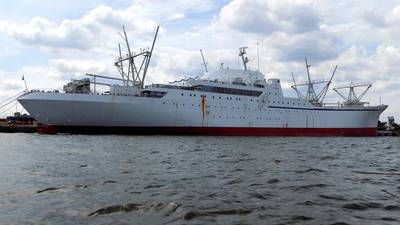 The U.S. Maritime Administration (MARAD) is seeking the public's help in determining the future of the world's first nuclear-powered merchant ship.

The NS Savannah was built by New York Shipbuilding Corp. and launched in 1959 as part of President Dwight D. Eisenhower's Atoms for Peace Program to promote the peaceful use of nuclear energy. The ship was removed from service in 1971 and the reactor was defueled. Registered as a National Historic Landmark since 1991, the ship is currently part of the National Defense Reserve Fleet (NDRF) in retention status. All that remains of the vessel's nuclear power plant are its systems, structures and components.

Having already defueled the ship's nuclear reactor, the U.S. Department of Transportation's MARAD is currently in the process of removing the remaining systems, structures and components that were part of the Savannah's nuclear power plant.

MARAD is also trying to determine what to do with the ship once its nuclear power plant is fully decommissioned, and last month the agency published a Federal Register Notice inviting comments on future plans for the vessel (the notice can be found here).

MARAD said it is currently considering several options, including converting the vessel into a museum ship, donating the vessel to a state maritime academy for training purposes, dismantling the ship at a scrapyard or scuttling it as an artificial reef, though it is also open to other feasible alternatives. The comment period runs through March 15.