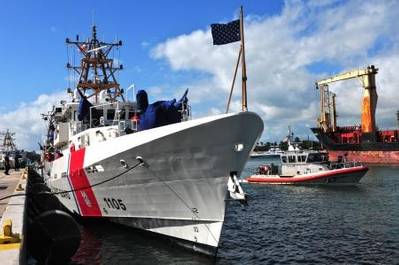 The U.S. Coast Guard Cutter Margaret Norvell, the fifth of the service's planned 58 Fast Response Cutters in the Sentinel Class and the first of its class to be named after a female Coast Guard heroine, arrived at her homeport Coast Guard Sector Miami, Fla., Sunday.

Coast Guard Cutter Margaret Norvell is scheduled for commissioning in New Orleans on June 1, 2013.  The location of the commissioning honors the history of the cutter’s namesake. This vessel is named after Coast Guard heroine Margaret Norvell who served admirably for 41 years with the U.S. Lighthouse Service in Louisiana from 1891 to 1932. The U.S. Lighthouse Service formally became part of the modern Coast Guard in 1915. Her devotion to duty saved the lives of countless sailors as she vigilantly stood the watch. Norvell served as keeper of both the Port Ponchartrain Light and the West End Light. Each FRC is named for an enlisted Coast Guard hero who distinguished him or herself in the line of duty. The Coast Guard Cutter Margaret Norvell is the first FRC named after a female.