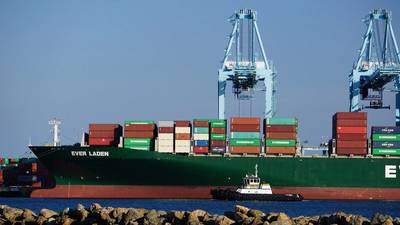 While those in the Beltway continue to struggle to offer solutions to U.S. supply chain capacity issues, it seems apparent that policymakers have at least found their scapegoat for these issues in the form of the maritime industry. A specific talking point during the State of Union Address, a White House-endorsed agreement between the Federal Maritime Commission (FMC) and Department of Justice (DOJ), multiple pieces of legislation, and a vigorous hearing before the Senate Committee on Commerce, Science, and Transportation seem aimed at “fixing” the supply issues solely through a focus on maritime antitrust immunity. Of course, without a more comprehensive solution focused on all aspects of supply chain stressors, to include warehousing and trucker shortages, these federal actions may actually exacerbate the on-going supply chain issues.

Biden addresses shipping competition
If you regularly follow U.S. politics you will know that it is a rarity to hear the maritime industry mentioned during a State of the Union Address. It is the unfortunate reality that our industry is not at the forefront of U.S. policymaking, which is generally reflected in the President’s annual address. Biden, however, deviated from tradition and included maritime competition in his speech in a clear effort to lay some of the blame for inflation on the maritime industry. In addressing inflation, Biden explained that, notwithstanding his general capitalist views, reductions in competition drive up prices and profits. Biden used ocean carriers as an example, stating, “We see what is happening with ocean carriers moving goods in and out of America. During the pandemic, about half a dozen or less foreign-owned companies raised prices by as much as 1,000 percent and made record profits.” The President followed these observations by “announcing a crackdown on those companies overcharging American businesses and consumers.”

It is unfortunate that President Biden did not instead focus on the many positive aspects of the U.S. maritime industry seen in recent years; for example, the fact that U.S. marine terminals have continually operated without any shutdown throughout the entirety of the pandemic, ensuring that cargo continues to flow to meet unprecedented consumer demand. However, with (1) Americans facing longer wait times for foreign-produced consumer goods, (2) inflation hitting U.S. taxpayers in the pocket in advance of midterm elections, and (3) U.S. agricultural exporters placing pressure on the Administration, ocean carriers proved to be an easy target.

The President’s remarks followed on the heels of a “historic agreement” between the FMC and DOJ to “make sure that large ocean freight companies cannot take advantage of U.S. businesses and consumers.” As a February 28, 2022 White House Fact Sheet (Lowering Prices and Leveling the Playing Field in Ocean Shipping) posits, ocean carriers “have formed global alliances—groups of ocean carrier companies that work together—that now control 80% of global container ship capacity and control 95% of the critical East-West trade lines.” The Fact Sheet goes on to assert that ocean carriers, “increased spot rates for freight shipping between Asia and the United States by 100% since January 2020, and increased rates for freight shipping between the United States and Asia by over 1,000% over the same period.” Finally, the White House called on Congress “to pass robust reforms to the ocean shipping industry, including reforms that address the current antitrust immunity for ocean shipping alliances.”

Sen. Amy Klobuchar (D-Min.) and Sen. John Thune (R-S.D.) introduced the Senate OSRA companion bill (S.3580) on February 3, 2022. Unlike the House, the Senate is holding hearings on the bill, including a March 3rd hearing before the full Committee on Commerce, Science, and Transportation. During the hearing FMC Chairman Daniel Maffei and Commissioner Rebecca Dye faced tough questions and asserted that the FMC “has responded to the supply chain challenges as aggressively, creatively and comprehensively as we can.” Many of the Senators present were clearly focused on expanding the FMC’s powers to further address ocean carrier competition.

One of the most vocal participants was (expectedly) Sen. Klobuchar, who in addition to sponsoring the Senate version of OSRA has also introduced the Ocean Shipping Competition Reform Act (S.3586), co-sponsored by Sen. Cory Booker (D-N.J.). The bill would grant the DOJ Antitrust Division with authority to bring a civil action in federal court to stop an agreement between ocean carriers or marine terminal operators that DOJ determines is likely to result in an unreasonable reduction in transportation service or increase in transportation costs. Notably, the FMC already possesses this authority, which it has rarely exercised. In addition, the bill would exponentially increase damages available to private parties who claim to have been harmed by the ocean carriers’ actions. The bottom line is that the bill would greatly increase the risk of ocean carriers and marine terminal operators entering into agreements, which many stakeholders argue have increase the efficiency of the marine transportation network.

Sen. Klobuchar is not alone in seeking sweeping reform to the Shipping Act. On March 1, 2022, Rep. Jim Costa (D-Calif.) introduced the Ocean Shipping Antitrust Enforcement Act. The bill would remove all antitrust immunity from ocean carrier and marine terminal operator agreements filed with the FMC under the Shipping Act. There are currently hundreds of agreements on file, which provide much of the structure for the operation of U.S. maritime commerce. Accordingly, removing the present antitrust immunity could have a transformative effect on the maritime industry.

A missing element
Throughout these recent White House and Congressional efforts there has been one glaring omission – the building of U.S.-flag capacity. It appears that D.C. policymakers have finally (after many decades) come to the realization that the U.S. is no longer in control of its own international commerce. Indeed, the Maritime Administration’s statistics continue to show only 84 U.S.-flag vessels operating in international trade. If President Biden or members of Congress wish to address these issues, and are seeking to transform the maritime industry, then the focus should be upon how to make U.S.-flag carriers more competitive in international trade. Without this aspect of the discussion any effort to increase maritime competition ultimately will be meaningless, as the U.S. will remain without control in the movement of its goods internationally. Given the concerns expressed by the President and Congress, the time to act is now, to ensure that the U.S. has a robust fleet sufficient to carry a substantial part of the waterborne export and import foreign commerce of the United States, as envisioned by the Merchant Marine Act of 1936.