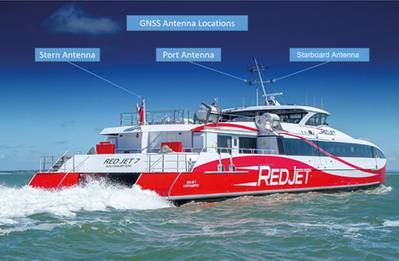 Red Funnel's Redjet 7 will serve as a bench test for an innovative vessel docking project between a maritime data company and university student game developers.

Efficient vessel docking which melds traditional maritime know-how and cutting edge gaming tech is the focus of a project between Azurtane, a Southampton maritime energy efficiency firm, and the School of Media Arts and Technology at Solent University.

The project seeks to leverage the skills of student game developers in a high precision kinematics (HPK), marine vessel docking project, with the goal of converting positioning data into a user interface to enhance the vessel commander’s visualization of the docking movements, reducing docking time and fuel consumption, as well as increasing safety.

“Our aim is to develop an intuitive, highly visual interface that presents positional information produced by our HPK in the most quickly assimilated way in order to make coming alongside easier for navigators on the bridge of a vessel,” Don Gregory, Azurtane’s MD said. “The students are taking the real time data from the HPK technology to produce an aerial 2D visualization that acts as a navigation guide, displaying heading, speed and rate of rotation of the vessel in relation to the dockside. This will allow the navigator to dock the vessel with a 4 cm accuracy, even without direct visual contact of the dockside.”

Specifically the company will be working with two students in the 3rd year of the BSc (Hons) computer games (software development) course to undertake the initial visual design, prior to progressing to coding the input of millisecond data streams that will position the trial vessel with pinpoint accuracy. The user interface is due to be delivered for user trials on Red Funnel’s high-speed ferry, Redjet 7, in March 2020.

“Any industry needs fresh ideas and up to date communication methodology,” said Gregory. “Without specialist in-house digital design expertise, where better to get the very best than from students on computer game development courses.”
Azurtane is funding this industrial placement opportunity for students, and is also looking to continue and build on the partnership with Solent University with the aim of collaborating on future projects that will advance the safety and efficiency of deep-sea vessels.

Tip #2: Fluid Selection - Using the wrong fluid at the right timeFluid selection plays a critical role in machine life, and…