Iran: Waterways Won't be Safe if its Oil Exports 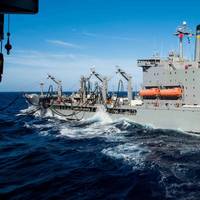 If Iran's oil exports are cut to zero, international waterways will not have the same security as before, its president said on Wednesday, cautioning Washington against upping pressure on Tehran in an angry confrontation between the longtime foes.The comment by President Hassan Rouhani coincided with a remark by Iranian Foreign Minister Mohammad Javad Zarif that Tehran might act "unpredictably" in response to "unpredictable" U.S. policies under President Donald Trump."World powers know that in the case that oil is completely sanctioned and Iran's oil exports are brought down to zero…

U.S. Unsure About Details of Tanker Towed to Iran 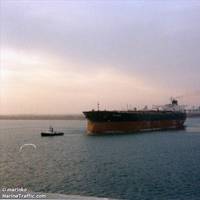 U.S. officials say they are unsure whether an oil tanker towed into Iranian waters was seized by Iran or rescued after facing mechanical faults as Tehran asserts, creating a mystery at sea at a time of high tension in the Gulf.The MT Riah disappeared from ship tracking maps when its transponder was switched off in the Strait of Hormuz on July 14. Its last position was off the coast of the Iranian island of Qeshm in the strait.Iran says it towed a vessel into its waters from the strait after the ship issued a distress call.

Iranian officials told Reuters on Friday that Tehran had received a message from U.S. President Donald Trump warning that a U.S. attack on Iran was imminent but saying he was against war and wanted talks on a range of issues.News of the message, delivered through Oman overnight, came shortly after the New York Times said Trump had approved military strikes against Iran on Friday over the downing of a U.S. surveillance drone, but called them off at the last minute."In his message, Trump said he was against any war with Iran and wanted to talk to Tehran about various issues," one of the officials told Reuters, speaking on condition of…

Iran's navy on Saturday launched a domestically made destroyer, which state media said has radar-evading stealth properties, as tensions rise with arch-enemy, the United States.In a ceremony carried live on state television, the Sahand destroyer -- which can sustain voyages lasting five months without resupply -- joined Iran's regular navy at a base in Bandar Abbas on the Gulf.The Sahand has a flight deck for helicopters, torpedo launchers, anti-aircraft and anti-ship guns, surface-to-surface and surface-to-air missiles and electronic warfare capabilities, state television reported.U.S. President Donald Trump pulled out of an international agreement on Iran's nuclear programme in May and reimposed sanctions on Tehran.

As Iran Oil Tenders Near, Investors Still in the Dark on Terms

Two years after Iran pledged to open up its oil industry in anticipation of the lifting of sanctions, foreign companies say they still have little information about Iranian oil fields and contract terms, hindering investment decisions. Bosses from oil majors including BP, Total, Eni, Royal Dutch Shell and LUKOIL have all travelled to Tehran this year, since the EU sanctions ended in January. Their teams spent weeks meeting local officials ahead of investment tenders due to start next month. But several senior executives and members of their negotiating teams told Reuters they still had not been given sufficient information about the geology of Iranian fields or contract terms.

Iran's Supreme Leader Ayatollah Ali Khamenei told military commanders on Sunday the United States had created the "myth" of nuclear weapons to portray Iran as a threat, hardening his rhetoric before nuclear negotiations resume this week. Khamenei, the highest authority in Iran, has supported the talks but continues to express deep mistrust of the United States. "They created the myth of nuclear weapons so they could say the Islamic Republic is a source of threat. No, the source of threat is America itself…

Iranian President Hassan Rouhani called for curbs on the state's involvement in business and an end to Tehran's international isolation on Sunday to help rescue an economy hurt by sanctions, corruption and mismanagement. His appeal in a speech to 1,500 economists appeared to be critical of hardliners who oppose his efforts to deliver Iran from years of erratic economic management by the previous administration of Mahmoud Ahmadinejad. "Our economy will not prosper as long as it is monopolised (by the government). The economy must be rid of monopoly and see competition," he said.