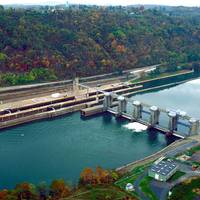 The U.S. Army Corps of Engineers (USACE) is evaluating remote operation of locks within the U.S. inland waterways system. Timetables are hazy, but the Corps plans to include remote operations capabilities during rehabilitations or new construction, in the work planned, for example, in the Upper Ohio Navigation Project, part of the USACE’s Pittsburgh District.In fact, the first install project is being readied at Lock & Dam 4 on the Monongahela River. L&D 4 is also known as Charleroi Locks and Dam because it’s at Charleroi, Pa, at river mile 41.5, between Pittsburgh and Fairmont, W.Va. 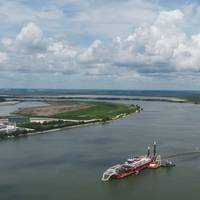 For dredging company officials, the first quarter of 2021 was a pretty good start to a new year. In a tough business, challenges and pitfalls are always expected. But from a bigger picture perspective—markets, regulations and policies—company officials couldn’t be faulted if a bit of optimism infused their worldview.There are a number of reasons for this. Many are well known and don’t need to be detailed here. Just quickly, though, WRDA 2020 would be at the top of the list. WRDA… 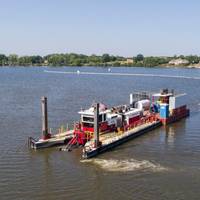 La Crosse, Wis.-based dredging, diving and marine construction company J.F. Brennan Company said it established a permanent Mid-South Region presence in Paducah, Ky., and will provide all Brennan services, including above and below-water construction and environmental remediation services.The Mid-South team consists of locals in the area and is under the leadership of Robert "Bob" Wheeler, who recently joined Brennan from Shimmick Construction Company, Inc. and most notably worked on the Olmsted Lock & Dam and the LaGrange Lock & Dam Major Rehabilitation projects, both operated by the U.S. 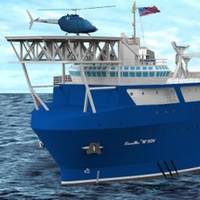 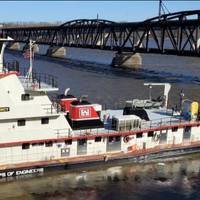 The U.S. Army Corps of Engineers' Rock Island District held a christening ceremony in Quincy, Ill., on Friday for the latest towing vessel to joins its fleet.The vessel, which has been renamed Quincy, was built in 2008 by Texas shipyard Orange Shipbuilding for $5 million and is being relocated from the Corps' Louisville District.Originally named the Gordon M. Stevens, the vessel was designed and contracted by the USACE's Marine Design Center and served as part of the construction… 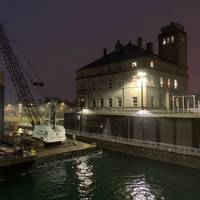 The U.S. Army Corps of Engineers (USACE) said the New Lock at the Soo project is on schedule as construction resumes on phase one and is initiated on phase two this week.Trade West Construction, Inc., and joint venture Kokosing-Alberici began moving equipment to the site the week of April 12 and 19.Trade West continues phase one, deepening the upstream channel to the Sabin and Davis Locks, which will be replaced by the new lock. USACE officials expect phase one completion in November 2021.Kokosing-Alberici is starting phase two this year, rehabilitating the upstream approach walls. 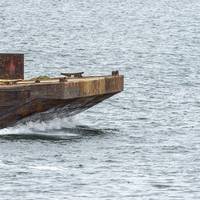 In two major pieces of legislation passed by Congress at the end of 2020 and the beginning of this year, Congress addressed the difficulty that many smaller inland and coastal ports have in obtaining funding for their infrastructure projects. First, on December 11, 2020 Congress passed the William M. (Mac) Thornberry National Defense Authorization Act for Fiscal Year 2021 (NDAA), and on January 1, 2021 overrode President Trump’s veto. Second, on December 24, 2020 Congress passed… 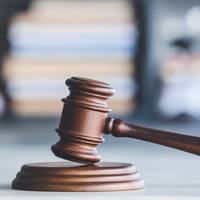 Dredging contractor Cashman Dredging & Marine Contracting Co., LLC will pay $185,000 to settle alleged dumping violations off the coast of Rhode Island.The Quincy, Mass.-based company will pay the fine under a recent settlement with the U.S. Environmental Protection Agency (EPA) for alleged violations of the Marine Protection, Research, and Sanctuaries Act (MPRSA, also known as the Ocean Dumping Act).EPA alleged that the violations occurred during the transport of dredged material from New Bedford Harbor in Mass. to the Rhode Island Sound Disposal Site (RISDS). It was an odd legislative journey, but ultimately one with a happy ending. That’s one way to sum up the rather tortuous process that led to the passage of the Water Resources Development Act of 2020 (WRDA). For the first time WRDA (usually reauthorized every two years) was not enacted as its own legislative bill. This time it was rolled into the massive government 2021 omnibus budget bill, the ‘‘Consolidated Appropriations Act, 2021,’’ signed into law on December 27.Still, the WRDA text itself… 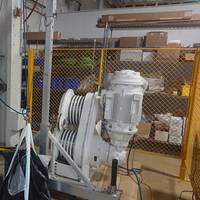 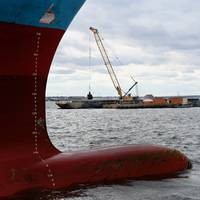 The Maryland Department of Transportation Maryland Port Administration (MDOT MPA) and the U.S. Army Corps of Engineers (USACE) are marking a milestone of environmental stewardship this month on the landmark restoration of Poplar Island near Talbot County. Simultaneously, the agencies are advancing plans for their next partnership using dredged materials to preserve and protect Maryland’s waterways: the Mid-Chesapeake Bay Island Ecosystem Restoration.Since 1998, Poplar Island has… 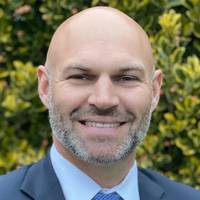 Sea Machines Robotics, a developer of autonomous command and remote-helm control systems, has promoted Phil Bourque to the role of business development and sales director, U.S. Government, effective immediately.In his new position, Bourque will primarily focus on advancing the company’s government contracts and related special projects. Bourque has relocated to the Norfolk, Va. area for the role, a move that enables Sea Machines to establish a new company foothold closer to key…

Boston Harbor Phase II Dredging Wraps Up Ahead of Schedule 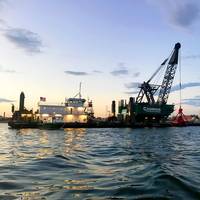 New England’s busiest port moves closer to welcoming larger containerships and growing the regional economy with the completion of the second phase of a three-part dredging program last month, nearly one year ahead of schedule.Cashman Dredging and JV partner The Dutra Group began Phase II of the U.S. Army Corps’ Boston Harbor Navigation Improvement Project in July of 2018. The recently completed phase, focused on deepening the main ship channels (the Outer Harbor Channel from 40 to 51 feet… 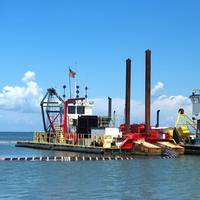 Congress recently made a major, if little noticed, new investment in American infrastructure. As part of the year-end budget deal, lawmakers released $10 billion that had been locked away in the Harbor Maintenance Tax Trust Fund to be used for its intended purpose: dredging U.S. harbors to keep our ports open and support U.S. economic and national security.Maritime infrastructure is an indispensable national asset, which is why the U.S. Department of Homeland Security recognizes the Maritime Transportation System (MTS) as one of the seven critical subsectors within the transportation system.

Cashman to Expand Its Fleet with New Hopper Dredge 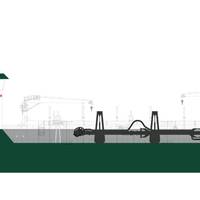 Cashman Dredging and Marine Contracting Co., LLC said it has signed a design contract with IHC America Inc. for a new 6,500 cubic yard trailing suction hopper dredge (TSHD).The new vessel will join Cashman Dredging’s current fleet of specialized dredging equipment and will primarily service the coastal protection and navigation maintenance markets when it enters service in 2024, the company said. Cashman has not yet determined which shipyard will build the new dredge, a company… 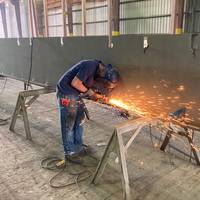 The U.S. dredging fleet is growing. Presently on order and under construction is a raft of in-demand equipment that will help to keep America’s ports and waterways open, safeguard coastal communities and maintain the vital flow of maritime commerce to, from and through the U.S.In August, Eastern Shipbuilding Group cut first steel for a new trailing suction hopper dredge (TSHD) it is building for Weeks Marine, and the keel was laid the following month at the builder’s Allanton Shipyard in Panama City, Fla. The new 6,540 cubic meter capacity dredge R.B. 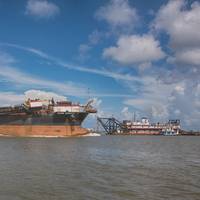 Humanity will forever remember 2020 as the “Year of COVID-19” fraught with the pains of a pandemic and its impacts on our physical and mental health. Yet, as a navigation representative along the Mississippi River Ship Channel (MRSC), I will always be able to see the bright side. In this case, that is life outside of COVID. The Mississippi River Ship Channel Deepening began in 2020, oddly enough on another date tied forever to a tragic time in our history. As a major focus for the Big River Coalition…

US Inland Waterways: Cheer the Year! 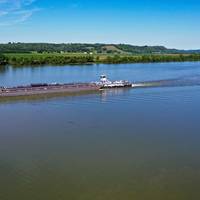 As we head toward the end of a very chaotic and COVID-filled 2020 and try to reflect on the positives, the inland waterways had a pretty good year overall. Waterways Council, Inc. (WCI), whose members depend on a modern, efficient inland waterways system, offers this look back, with hopes ahead for the passage of a Water Resources Development Act (WRDA) 2020 with our construction cost-share adjustment priority in the lame duck session of Congress.A disappointing FY21 budget requestIn February… 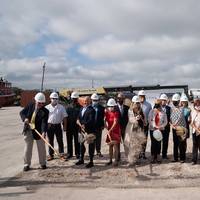 Plans to convert the century-old Port of Fort Pierce into a repair and refit facility for the global fleet of megayachts and large sailing yachts are moving full speed ahead.After a lengthy permitting and review process, Derecktor Shipyards has been granted approval from the U.S. Army Corps of Engineers, U.S. Fish and Wildlife Service, Florida Department of Environmental Protection, St. Lucie County Board of County Commissioners and the City of Fort Pierce to begin construction of its newest shipyard – Derecktor Ft. 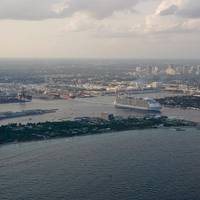 The U.S. Army Corps of Engineers will soon begin work on two important maintenance projects at Port Everglades in Fort Lauderdale, Fla. Port officials say they do not foresee any interruption of services during the construction. The South Jetty, located at the north end of Dr. Von D. Mizell-Eula Johnson State Park, will be restored to its original profile and cross section. A notice to proceed was issued to the contractor in October 2020. The work is expected to begin in February 2021 and the anticipated completion date is September 2021. 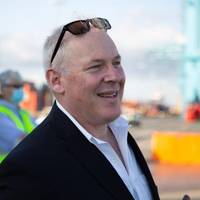 Ports are economic engines for the regions they serve, and the impact from business activities at the Port of New York/New Jersey runs as big as the area it serves: 46 million consumers in a four-hour radius. The port is an economic giant in and of itself, providing for nearly a half a million jobs, a cumulative $35 billion in personal income and a cumulative $98 billion in business income. Sam Ruda, Director, Port NY/NJ, discusses a record 2019, continued investment in infrastructure… 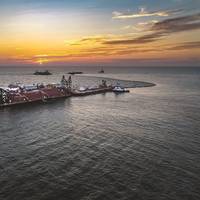 Great Lakes Dredge & Dock Co. announced Thursday it is moving its corporate headquarters to Houston, positioning the nation’s largest dredging services provider nearer to major regional projects and opportunities. The firm will also open regional offices in Jacksonville, Fla., and Staten Island, N.Y.The move to Houston from from Oak Brook, Ill., which stems in part from changing industry dynamics, places the company closer to key regional customers and new markets, especially along the Gulf Coast and the Mississippi River…