Hapag-Lloyd Cruises presented the Hanseatic nature for the first time in Hamburg on Saturday (May 04, 2019).The provider of adventure and classic cruising with luxury voyages to Polar Regions, Caribbean, Central America, Europe & more said that Hanseatic nature is the first of three, structurally- identical ships in the cruise line’s new expedition class. The ship left Hamburg on May 5, 2019 for its inaugural cruise, which will take it to the Hebrides, Orkney Islands and Shetland Islands, finishing in Bergen.

A training tackling maritime crime is undergoing in Jeddah, Saudi Arabia (10 - 28 March 2019), informed the International Maritime Organization (IMO).Members of three key regional maritime security agreements -The Djibouti Code of Conduct; the West and Central Africa Code of conduct; and the Regional Cooperation Agreement on Combating Piracy and Armed Robbery against Ships in Asia (ReCAAP)-, which IMO has helped to establish, are participating in the program.Thirty participants from 24 countries are learning theoretical and practical skills to deal with piracy/robbery against ships…

The French-flag cruise line Ponant is testing the Solid Sail concept on its vessel Le Ponant. Tests are being conducted with maritime construction company Chantiers de l’Atlantique as part of the sailing cruise-vessel project Silenseas, launched two years ago.Two patents have been filed—in 2009 and 2017—for the new type of sail, made of fibreglass, carbon and epoxy-resin panels in a carbon-slat frame. This new technology will significantly reduce energy consumption tied to propulsion… 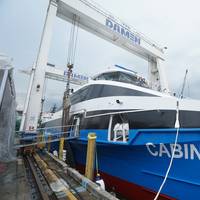 In a ceremony held at Damen Shipyards Singapore on April 19, His Excellency, Dr. Augusto da Silva Tomás, Minister of Transport for the Republic of Angola officially launched the new Damen Fast RoPax Ferry 4812 ordered by the Ministerio dos Transportes through IMPA (Instituto Marítimo e Portuário de Angola).The vessel will be operated by TMA Express (Transporte Marítimo de Angola) and operate on Angola’s Atlantic coastline between the capital Luanda and Cabinda, around 400 kilometers to the north, via Soyo.The Fast RoPax Ferry 4812 is the latest addition to Damen’s Fast RoPax Ferry range.

In a bid to harmonize port state control inspection procedures that will lead to the elimination of substandard shipping in the West and Central Africa sub-region, the Abuja Memorandum of Understanding (MoU) will host its 3rd Ministerial Conference and 9th Port state Control Committee Meeting with the aim of developing a unified system of Port State Control inspection procedure for the region. The Memorandum of Understanding on Port State Control for West and Central African Region… 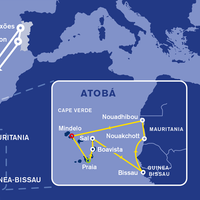 Transinsular announced the 'Lince Class', the fastest maritime connection with Cape Verde from Portugal (Leixões / Lisbon) and the Canary Islands (Las Palmas). And therefore, the most competitive solution for exporting products from Portugal, Spain, Northern Europe and the Mediterranean. At the same time, and as a complement to the 'Lince Class', the ETE Group will offer inter-island ‘ATOBÁ’ cabotage services, on the way from Praia, Mindelo, Sal and Boavista, connecting these ports to the African proximity markets such as Guinea-Bissau and Mauritania.

A regional conference of countries in west, central and southern Africa has committed to continue to work at both national and regional levels to boost preparedness to deal with oil spill incidents which could be devastating both for the marine environment and financially. The conference (6-9 November) in Abidjan, Côte d'Ivoire, was hosted by CIAPOL, the Ivoirian pollution control centre. It brought together industry and government focal points from 20 out of 22 west, central and southern African countries covered by the Global Initiative for West, Central and Southern Africa (GI-WACAF).

The Greenpeace ship My Esperanza has docked at the port of Praia in Cape Verde. For eleven weeks the Esperanza will sail the waters of six West Africa States - Cape Verde, Mauritania, Guinea Bissau, Guinea, Sierra Leone and Senegal to raise awareness on the state of fisheries through political events, public engagement and consultations with the West-African science community. The ship tour named “The West Africa tour of hope” will provide an opportunity to make these countries’ voice on protecting their own sea and marine resources heard internationally. 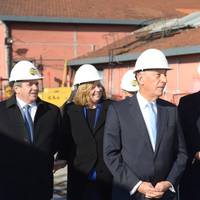 The business portfolio internationalization and the development of river operations are two of ETE Group’s strategic focus, as referred last Friday on the 80th birthday ceremonies at Naval Rocha shipyard (in Lisbon) with the presence of the President of Portugal, Marcelo Rebelo de Sousa, the Minister for the Sea Affairs, Ana Paula Vitorino and the Minister for Environment, Matos Fernandes. According to Luis Nagy, the CEO, “at ETE Group we are  starting the ninth decade with a strong focus on the internationalization of our operations…

Further to Hapag-Lloyd's information to their Customer circular issued in 4th March 2016 on the preventive actions of Zika virus for all cargoes entering China, the company has now provided an updated list of origin countries. All shipments from the following countries (indicated below) shall be subject to anti-mosquito treatment. Inbound shipments without proof of anti-mosquito treatment will be fumigated at the port of discharge in China by the authorities without prior notice. 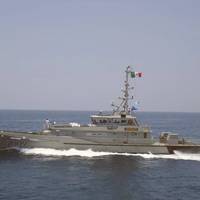 The Mexican Navy (Secretaria de Marina - SEMAR) and Dutch shipbuilder Damen Shipyards Group have signed contracts for three, 42-meter patrol vessels in addition to navy’s existing fleet. The new ships will be of the Damen Stan Patrol 4207 design. Known in Mexico as the Ténochtitlan class, the three new SPa 4207 vessels will be built by the Mexican Navy Yard ASTIMAR 1 in Tampico. Damen will provide the engineering, material package, technical assistance and crew training. The vessels will be named after Mexican historical sites and are expected to be launched in 2016.

The Royal Australian Navy operated Sail Training Ship (STS) Young Endeavour sailed into Fremantle today, completing a year-long circumnavigation of the world. Assistant Minister for Defence Darren Chester was in Western Australia to welcome the seafarers back to Australian soil and personally congratulate members of the Royal Australian Navy crew and the 24 young Australians who sailed the ship on the last leg across the Indian Ocean from Cape Town, in South Africa. “A circumnavigation of the world is a remarkable achievement for all involved…

Ballast Water Management in the Field Put to the Test 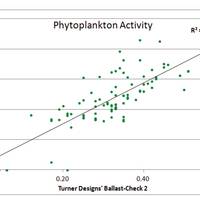 Turner Designs, along with scientists from around the world participated in a research cruise aboard the RV Meteor, a vessel owned by the Federal Republic of Germany through the Ministry of Research and Technology (BMFT) and funded by the German Research Foundation (DFG). The goal of this cruise was focused on ballast water sampling techniques and protocols. Various instruments were used to test collected ballast water enabling researchers to determine efficiency for the various sampling techniques employed. 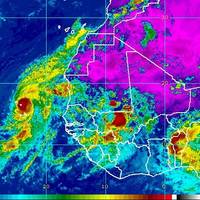 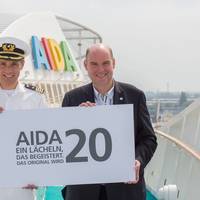 With the birthday of the cruise ship AIDAcara on June 7, 2015, AIDA Cruises is heralding the 20th year of its company history. On Sunday evening, more than 20,000 guests will toast together aboard the 10 AIDA ships, opening the anniversary celebrations. “AIDA – an inspiring smile. The original turns 20” is the slogan of the anniversary campaign, which will provide inspiration until the end of 2016 with exciting insights into the history of the modern cruise along with a variety of promotions and events.

The Royal Australian Navy operated Sail Training Ship Young Endeavour set sail from Sydney today for a 12-month voyage, circumnavigating the globe. Parliamentary Secretary to the Minister for Defence, Darren Chester, attended the departure from Fleet Base East, and spoke with members of the Royal Australian Navy crew and the 24 young Australians who will sail the ship on the first leg, to Rio de Janeiro, Brazil. "The navy crew and young Australians who set sail from Sydney today represent every Australian state and territory.

The International Transport Intermediaries Club (ITIC) has issued the following general advice related to the outbreak of Ebola. Vessels that have recently called in an affected country should contact their local agents prior to arrival at the next ports of call for the latest country specific advice regarding measures taken to avoid the spread of Ebola. ARGENTINA: Pilot companies rendering pilotage services in the River Plate have decided that their pilots will not board any vessel coming from the infected areas (Guinea… For its third repower with Smith Maritime, Laborde supplied three Mitsubishi S12R-Y2MPTK Tier II engines rated at 5,000 hp for the tug Rhea. For its maiden voyage, Rhea towed a huge piece of oilfield equipment from Texas to Cape Verde Islands off of Africa before moving on to Nigeria, towing continuously for seven weeks. Rhea is a small, powerful, agile, sea-going tug capable of withstanding the rigors of ship and barge towing or ocean rescue service in all weather conditions. It’s fitted and built for extended service at sea or in distant and remote locations. 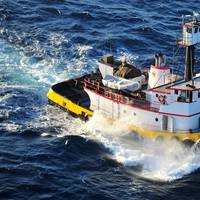 When business depends on commercial vessels, it's essential for these boats to stay in good condition. Unreliable engines and equipment can lead to days or weeks off the water for repairs, resulting in lost customers. To ensure its fleet is always prepared for the job, Smith Maritime depends on Laborde Products. For its third repower with Smith Maritime, Laborde supplied three Mitsubishi S12R-Y2MPTK Tier II engines rated at 5,000 hp for the tug Rhea. For its maiden voyage, Rhea towed a huge piece of oilfield equipment from Texas to Cape Verde Islands off of Africa before moving on to Nigeria. 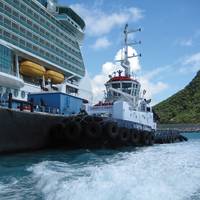 The recent 2013-14 National Budget of Trinidad and Tobago firmly highlighted the government’s intention to endorse Shipbuilding and Repair as a means of diversifying our traditional oil and gas economy. Trinidad & Tobago is in the middle of the world’s shipping lanes with an approximate 31,000 voyages per year passing within 25 nautical miles, positioning the location as an attractive choice for vessels traversing these principal routes. In addition, approximately 14,000 oceangoing vessels pass through the Panama Canal each year and this is expected to double after mid-2015…

IMO Secretary-General Koji Sekimizu welcomes the signature by 22 States of the Code of Conduct concerning the prevention of piracy, armed robbery against ships and illicit maritime activity in west and central Africa. The Code was adopted formally by the Heads of State meeting in Yaoundé, Cameroon, on Tuesday (25 June, 2013), attended by 13 Heads of State from west and central African countries. The document was signed in Yaoundé by Ministers of Foreign Affairs or other delegates, bringing it into effect for the 22 signatory States: Angola, Benin, Cameroon, Cape Verde, Chad, the Congo, Cote d'Ivoire, the Democratic Republic of the Congo, Gabon, Gambia, Ghana, Guinea, Guinea-Bissau, Equatorial Guinea, Liberia, Mali, Niger, Nigeria, Senegal, Sierra Leone, Sao Tome and Principe and Togo.