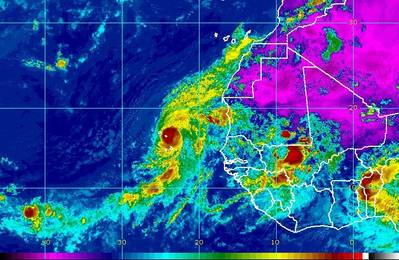 Hurricane Fred strengthened early Monday in the eastern Atlantic as it approached the Cape Verde Islands, while the remnants of Tropical Storm Erika brought flooding to parts of South Carolina, according to U.S. forecasters.
The center of Fred is expected to pass near or over the northwestern Cape Verde Islands, an archipelago off the west coast of Africa with a population of 525,000.
Fred had maximum sustained winds of 85 mph (137 kph), but was expected to gradually dissipate after passing the Cape Verde Islands, the National Hurricane Center (NHC) said.
Fred was not expected to threaten the Caribbean or the United States.
The NHC said it was rare for a storm to form so close to the coast of Africa. Fred was the first hurricane to go through the Cape Verde Islands since 1892, according to the official Atlantic tropical cyclone record which begins in 1851.
Tropical Storm Erika dissipated over Cuba on Saturday after killing at least 20 people in the small eastern Caribbean island of Dominica, and one person in Haiti.
Its remnants brought thunderstorms to Florida over the weekend before moving into South Carolina on Monday.
By 9:30 a.m. EDT (1330 GMT), almost 6.5 inches (16.5 cm) of rain had fallen at Charleston International Airport, according to the National Weather Service.
In Charleston's outlying suburbs, some residents reported on social media that they could not get out of their driveways, and local TV stations showed pictures of cars submerged above their windows and over the hoods.
Charleston police closed streets in peninsular Charleston, which is at or slightly above sea level.
The torrential rain coincided with "king tides," especially high tides caused by a full moon and expected to last until Wednesday, city officials said.