Seaspan Ferries Corporation (SFC) has welcomed two new dual-fueled/hybrid liquefied natural gas (LNG), diesel and battery vessels to its fleet during a double commissioning ceremony held at its Tilbury Terminal in British Columbia on April 9. The Seaspan Swift and Seaspan Reliant, the first eco-ferries of their kind in North America, were formally christened by sponsors Christy Clark, Premier of British Columbia, and Anisa White, wife of Doug White III, Councilor and Chief Negotiator for Snuneymuxw First Nation. “April 9, 2017 will be remembered as a historic milestone for Seaspan Ferries and we are extremely fortunate to have two sponsors who represent our connection to both the past and future to help bring our new vessels to life,” said Steve Roth, President – SFC.

AltaGas says it will proceed with construction of Canada’s first West Coast propane export facility. It has federal approval and long-term commercial agreements in hand. The Ridley Export Terminal, located at Prince Rupert, B.C., will be designed to ship 1.2 million tonnes of propane per year and is estimated to cost approximately $450 - $500 million, the company says. The terminal, near Prince Rupert, will cut shipping distances to Asian markets to 10 days from 25 compared the U.S. Gulf Coast, the company says.

B.C. Premier Christy Clark has announced an agreement in principle with Pacific NorthWest LNG, owned in majority by Malaysia's Petronas, for a liquefied natural gas development on the province's northwest coast. Hailed as “the largest capital investment in B.C. history,” Clark said the LNG framework will result in stable, long-term revenue for B.C. and $36 billion in investment, including a proposal for an LNG facility near Prince Rupert. Both are intended to provide certainty…

British Columbian officials on Friday criticized the Canadian government's response to an oil spill in the waters around Vancouver, calling into question plans for new crude oil export pipelines in the Pacific Coast province. Nearly 3,000 liters of oil spilled after an anchored bulk carrier began leaking bunker fuel in English Bay, just west of Vancouver's downtown core, on Wednesday. Officials in the province said the coast guard responded but was slow to contain the slick, which spread towards beaches.

British Columbia’s first liquefied natural gas (LNG) proposal at Grassy Point near Prince Rupert has filed its export application with Canada's National Energy Board (NEB). "Aurora LNG is moving forward with their plans to export B.C.'s natural gas to new markets overseas," said Premier Christy Clark. "This marks another step towards realizing the transformative opportunity LNG presents us. "Filing an application for an export license is an important step," said Kevin Reinhart, CEO of Nexen. "However, we still have a lengthy process ahead of us before final investment decisions are made. Aurora LNG has filed its export application just over two weeks after signing a sole proponent agreement with the Province of British Columbia. 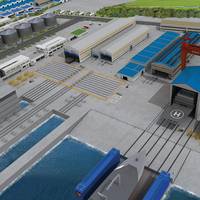 A groundbreaking ceremony today at Vancouver Shipyards, in North Vancouver marks a significant milestone in the re-development of the shipyard into a world-class facility that will build a new generation of vessels for the Canadian Coast Guard and Royal Canadian Navy. Construction will result in the completion of four new fabrication buildings, a shipbuilding gantry crane and a load-out pier. Seaspan will invest approximately $200 million into the yard to deliver outstanding value to the Federal Government and efficiently build the new Non-Combat ships.

According to a report from The Chronicle Herald, the week before last Nova Scotia unveiled a plan to lobby Ottawa on behalf of Irving Shipbuilding Inc.’s Halifax Shipyard, all in a bid to win a $35b contract to build 20 navy ships over 30 years. In an effort to compete with that bid, British Columbia Premier Christy Clark announced that she will go to Ottawa to promote the bid by Vancouver Shipyards Co. Ltd.   Source: The Chronicle Herald