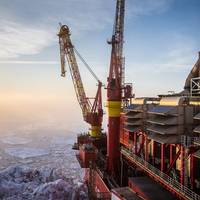 President Vladimir Putin hailed Russia's first shipment of Arctic offshore oil on Friday, saying the platform decried by environmentalists will help Moscow expand its global energy markets share. Gazprom Neft, the oil arm of Russia's top gas producer Gazprom, shipped the first 70,000 tonnes of oil by tanker from the Prirazlomnoye platform, the site of a protest by 30 Greenpeace activists who were arrested last year. The launch of oil production in the Arctic, seen by Russia as one of the key sources in the gradual replacement of output from its depleted West Siberian fields…

Greenpeace Posts Bail for Nine of the Arctic 30

Greenpeace International said it has already posted bail for nine of the Arctic 30, but does not expect them to be released before the weekend. Lawyers say they are making bail payments - set at 2 million rubles (€45,000) for each detainee - as quickly as they can. At court hearings this morning Faiza Oulahsen from the Netherlands and British citizen Alexandra Harris became the 13th and 14th Arctic 30 prisoners to be granted bail. Lawyers for Greenpeace today said there are a number of bureaucratic issues to resolve before any of the Arctic 30 are released from jail and they do not expect any of them to be out of prison until the weekend, possibly later. It is still not clear whether their movements will then be restricted. Two Greenpeace activists were today granted bail in St Petersburg, becoming the fourth and fifth of the so-called Arctic 30 to be told they will soon be released. Brazilian Ana Paula Maciels, 31, and David Haussmann from New Zealand, 49, from New Zealand were told they will be released from jail if they can provide financial surety within four days. The development came the day after three Russian activists were told on Monday, November 18 they would be released from prison and, on the same day, an Australian activist was refused bail and ordered to return to jail until February 24. 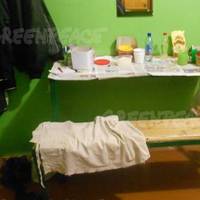 Greenpeace International reports that it understands from diplomatic sources that the thirty men and women detained by Russia following a peaceful protest against an Arctic oil platform are being moved from a detention centre in Murmansk to a jail in St Petersburg. Lawyers for Greenpeace are not aware of the reasons for the move. "“The detainees shouldn’t be in jail at all. They should be free to join their families and restart their lives. St Petersburg has some daylight in the winter months, unlike Murmansk. Families and consular officials will now find it easier to visit the thirty.

Prosecuting authorities in Russia were under fire today after it was revealed that they have failed to lift charges of piracy against the Arctic 30, despite pledging to do so. Russia’s powerful Investigative Committee announced last week that the piracy charges – which carry a 15-year jail sentence – would be replaced with charges of hooliganism. But when the thirty detainees were brought before the Committee over the course of this week, the piracy charge was not withdrawn. Instead each of them was simply served with the additional charge of hooliganism. They now stand accused of both offences, which carry a maximum sentence of 15 and 7 years, respectively. Greenpeace International activist Frank Hewetson (U.K.) has been refused bail by the Regional Court of Murmansk in Russia, bringing the number of rejected bail appeals to 10. Activist Marco Weber (Switzerland) also appeared in court today, but his appeal hearing was postponed until October 21 due to the lack of a German language translator. Italian crew member Cristian D'Alessandro will appear in court later  for his bail hearing and more appeals will be held later this week.

Greenpeace International executive director Kumi Naidoo has written to President Vladimir Putin offering to travel to Moscow as early as possible to meet with the Russian President, in an effort to end the continued incarceration of 28 peaceful activists and two freelance journalists. In the letter, delivered today to the Russian embassy in The Hague, Naidoo offers to move his life to Russia and act as a guarantor for the good conduct of the activists if they are released on bail. President Putin had suggested he was open to dialogue with Greenpeace when he spoke at the recent International Arctic Forum conference in the Russian city of Salekhard. Kumi Naidoo's letter has been sent in response to Mr. Putin's reported remarks.

Thousands Stand Up for Greenpeace Detainees 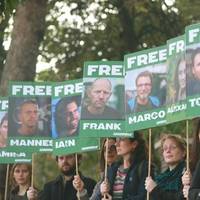 Thousands of people took part in an emergency day of solidarity protests 5, October 2013, around the world to demand the release of 30 people imprisoned in Russia after they were detained aboard a Greenpeace ship in the Arctic. Peaceful events were held on every continent, in more than 135 locations across 45 countries, from New Zealand to Mexico, from Thailand to Finland and the United States. There are also protests planned across Russia. Earlier, 28 Greenpeace activists, and a freelance photographer and a videographer…

The Russian state prosecutor laid charges of piracy against a Greenpeace activist who protested against oil drilling in the Arctic. A freelance videographer has also been charged with piracy, which carries a maximum 15 year jail sentence. It is an extreme and disproportionate charge. Charges are expected to be brought against other Greenpeace campaigners over the coming hours and days. “A charge of piracy is being laid against men and women whose only crime is to be possessed of a conscience. This is an outrage and represents nothing less than an assault on the very principle of peaceful protest. Any claim that these activists are pirates is as absurd as it is abominable. It is utterly irrational, it is designed to intimidate and silence us, but we will not be cowed. 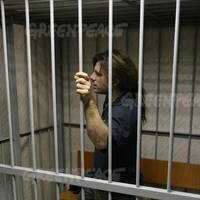 A further eight Greenpeace International activists have been detained for two months in Russia pending an investigation into possible charges of piracy. The eight will join 22 others, including a freelance videographer and freelance photographer, detained on Thursday following a peaceful protest against Arctic oil drilling. Greenpeace International pledged to appeal all 30 detentions. The 30 have already been held by the Russian authorities for 10 days since the Greenpeace ship Arctic Sunrise was illegally boarded (in the view of Greenpeace) in international waters on Thursday, September 19. Twenty-eight Greenpeace International activists, as well as a freelance photographer and a freelance videographer, were taken to the Lenin district court in Murmansk in handcuffs, where they were placed in a cage and provided inadequate translators. Of the 30, a total of 22 were remanded in custody for two months pending an investigation into piracy charges, while eight were detained for three days pending a new hearing. “These detentions are like the Russian oil industry itself, a relic from an earlier era. 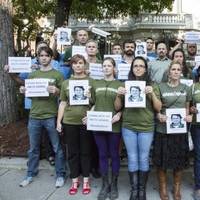 According to media reports, Russian President Vladimir Putin has declared that the 30 Greenpeace International activists detained by Russian authorities after an Arctic drilling protest are ‘obviously not pirates’, but has suggested that they may have broken international laws. He made these remarks at an Arctic forum in Salekhard. All 30 activists remain under arrest near Murmansk, apparently in different locations. Five people were interviewed last night by the Investigative Committee and served papers confirming they were are being investigated for piracy offences. 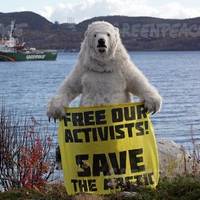 Greenpeace's “Arctic Sunrise” is nearing the Russian port on tow from the Pechora Sea, accompanied by a Russian Coast Guard vessel (with the protest crew locked up on board) after an attempt to board the Gazprom drilling rig Prirazlomnaya. The Greenpeace ship Arctic Sunrise is close to arriving in the port of Murmansk after being boarded by Russian authorities last week following a peaceful protest against Arctic oil drilling. The ship has arrived under tow in the fjord near Murmansk  accompanied by a tug boat and the Russian Coast Guard vessel Ladoga… 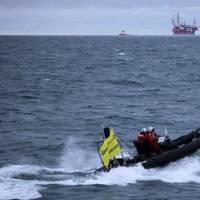 Greenpeace personnel board Russia's Gazprom Prirazlomnaya platform in the Pechora Sea. The activists aim at disrupting the platform’s operation and bring focus on climate change in the Arctic. The activists set off in three inflatable speedboats from the Greenpeace ship "Arctic Sunrise" and scaled the platform via mooring lines. Six climbers have taken up positions on the structure and claim to have interrupted the platform's operations. Greenpeace say their people are out of reach and have enough supplies to last them for several days.