The former chairwoman Choi Eun-young (55) of the now-defunct Hanjin Shipping was jailed 18 months for insider trading, reports Yonhap. According to the report the Seoul Central District Court found Choi  guilty of selling off her family-stake in the shipping company days before it declared a court-led debt restructuring plan. She was also fined with USD 1.09 million. The court said, although her charges are grave enough to deserve a heavy punishment, it considered that the stake…

Former Chief of Daewoo Shipbuilding Gets 6 Years in Jail

Former Daewoo Shipbuilding & Marine Engineering  (DSME) boss Nam Sang-tae sentenced to six years in prison by Korean court for embezzlement and bribery, Yonhap reported. The report said that the Seoul Central District Court handed down the guilty verdict to Nam Sang-tae, 67, convicting him of accounting fraud, embezzlement, breach of duty and bribery. The court ordered him to forfeit 880 million won (US$806,000). Prosecutors have demanded an eight-year prison term. The court said…

A South Korean court declared Hanjin Shipping Co Ltd bankrupt on Friday, after ruling earlier this month that the firm's liquidation value would be worth more than its value as a going concern. Hanjin Shipping, which had been the world's seventh-largest container shipper, applied for court receivership in late August after its creditor banks halted further support. The Seoul Central District Court said in a statement it has chosen a bankruptcy administrator, and claims by creditors are due by May 1, 2017. The first meeting of creditors will be held on June 1, 2017.

The Seoul Central District Court Thursday decided to end the bankruptcy protection of Hanjin Shipping Co. Ltd (Hanjin Shipping), leaving the company to succumb to a declaration of bankruptcy later this month, Yonhap reported. Hanjin, once the world's seventh- or eighth-largest container shipper, filed for court receivership in late August 2016 as its creditors, led by the state-run Korea Development Bank (KDB), said they would not provide additional financial support to Hanjin starting from September 4.

A South Korean court said on Thursday it decided to end Hanjin Shipping Co Ltd's court receivership process and expects to declare bankruptcy on February 17 after a two-week period for appeals.   The Seoul Central District Court said in a statement that it made the decision as the firm's liquidation value would be worth more than its value as a going concern.   Hanjin Shipping, which had been the world's seventh-largest container shipper, applied for court receivership in late August after its creditor banks halted further support.   Swiss shipping group MSC said on Wednesday its unit has bought a stake in Hanjin Shipping's U.S. port operator, the latest Hanjin asset to be sold.   Reporting by Joyce Lee

Ko Jae-ho, the former head of the ailing South Korean shipbuilder Daewoo Shipbuilding and Marine Engineering (DSME), has been sentenced to 10 years in prison by a lower court in Seoul over accounting fraud, Yonhap News Agency reports. The Seoul Central District Court found Ko Jae-Ho guilty of manipulating the company's books in 2013 and 2014, when he was the CEO, and using them to raise bank loans. Ko Jae-Ho's punishment epitomises the decline of Daewoo, which was once one of the country's biggest conglomerates, or chaebol.

South Korea’s Korea Line has been picked as the preferred bidder to buy the troubled shipper Hanjin Shipping’s Asia-US operations, beating Hyundai Merchant Marine, reports Reuters. The judge at the Seoul Central District Court, which is handling Hanjin’s insolvency proceedings, awarded Korea Line the first right to purchase the assets of Hanjin’s Asia-U.S. route, as well as its stake in a California terminal. The court said it chose Korea Line over Hyundai Merchant Marine Co., which had been expected to win.

STX Offshore & Shipbuilding has got the green light to carry on operations. A Seoul court today approved its rehabilitation plan, saving the yard, once the world’s fourth largest, from liquidation, reports Yonhap. STX Shipbuilding, once South Korea's No. 4 shipbuilder, has been placed under court receivership since June, amid a protracted slump in the shipbuilding industry. The Seoul Central District Court approved its revival plan, ending the financially shaky shipyard’s five-month long court receivership.

Four parties have expressed interest in buying one or both of South Korea's STX Offshore & Shipbuilding Co Ltd and a controlling stake in STX France SA, a spokesman for the Seoul court overseeing STX Offshore's receivership said on Friday. The Seoul Central District Court spokesman declined to comment on the names of the parties. The South Korean court in October decided to allow the two units of the collapsed STX shipbuilding group to be sold either separately or together. Initial bids were due on Friday for all of STX Offshore & Shipbuilding Co Ltd and a 66.7 percent stake in STX France SA that is held by STX Europe AS. The four parties that entered non-binding bids in the sale were France's DCNS Group…

Danaos Corporation, one of the world's largest independent owners of containerships, today received notice that Hanjin Shipping Co. Ltd. (Hanjin) has filed for receivership with the Seoul Central District Court and requested that the court freeze its assets. Danaos currently charters eight of its vessels to Hanjin on long term, fixed rate time charters. The time charters associated with these vessels represent approximately $560 million of Danaos' $2.8 billion contracted revenue backlog as of June 30, 2016.

HMM Among 5 Bidders to Take Over Hanjin’s Transpacific Routes

South Korea’s Hyundai Merchant Marine (HMM) is one of five bidders for the trans-Pacific and intra-Asia networks of  Hanjin Shipping Co, reports WSJ. HMM submitted letters of intent to bid on Friday, the last day for such submissions. The five bidders now have until Nov. 4 to review the assets, which include the vessels that operate on the trans-Pacific route. The final bids due Nov. According to various reports, the Korea Line Corporation, and the Korea Shipowners’ Association (KSA) are among five bidders for Hanjin Shipping’s transpacific operations.

South Korean container shipper Hanjin Shipping said on Monday that it would close all 10 of its European businesses operations, reports the Wall Street Journal. Hanjin has applied for court approval to close all 10 of its business operations in Europe, including its regional headquarters in Germany, according to a company spokeswoman. The decision to shut down its European business is part of a breakup process for Hanjin, which began earlier this month. A judge had said the court, which is handling Hanjin’s insolvency proceedings, would consider selling the company entirely.

Hanjin Wants to Sell to Maersk

The Seoul Central District Court  has approved a divestment of Hanjin Shipping's Asia-US network and the bankrupt carrier has encouraged Maersk Line to bid on the assets, according to The Korea Economic Daily. It was reported that the ailing Korean shipping company recently contacted Maersk Line, the world's largest container shipping company, to take part in the bidding for the deal. According to the Court on October 13, Hanjin Shipping is set to undertake a main bidding on November 7 after making a business transfer notification on October 14 and taking letters of intent by the 28th.

Hanjin Assets to Go on Sale 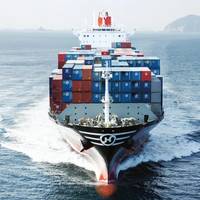 The South Korean court overseeing Hanjin Shipping’s receivership process plans to put the collapsed shipper’s Asia-U.S. operations up for sale as early as Friday, says a report in Fortune. The company said that it is selling major businesses, including its Asia-U.S. route network, and will receive letters of intent by October 28. In a regulatory filing the company said a Seoul court overseeing its receivership process approved a public auction of the major businesses, and it is to get binding bids from interested parties by November 7, after a due diligence process.

The South Korean bankruptcy court handling the insolvency proceedings of Hanjin Shipping Co. said Wednesday a sale of the troubled company is possible, say media reports. However, the court has yet to reach a decision. "The sale of Hanjin is one of the options we're considering. If we conclude that it's the best way to rehabilitate the company, we'll do so, " Choi Ung-young, a judge and a spokesman for the Seoul Central District Court, said. According to Bloomberg, the Seoul Central District Court has called for a meeting of officials who are evaluating the container line.

Korea Development Bank has offered a conditional credit line of 50 billion won ($45 million) to help ease supply-chain disruptions caused by the collapse of Hanjin Shipping Co, says a report in Reuters. An estimated $14 billion of cargo was trapped on Hanjin ships when the world's seventh-largest container carrier collapsed late last month, creating havoc ahead of the crucial holiday shopping season. The credit line is to be used only when all available funds from the nation’s biggest container mover…

Busan: Business May Not be As Usual, Post Hanjin

Though Busan Port, the largest customer of Hanjin Shipping and hit hardest by the Liner's collapse,  asserts that everything is under control, doubts are being raised on Hanjin rehab plan as ships clog at the South Korean port, reports Reuters. As 13 Hanjin ships crowded waters outside the country's biggest port, the South Korean court handling Hanjin's receivership cast doubt on the container carrier's ability to survive a restructuring. A rehabilitation plan for the world's…

Parent group transfers $36 mln to troubled shipper. It may cost over $150 mln to unload stranded cargo. The chairman of Hanjin Group transferred 40 billion won ($36 million) to Hanjin Shipping on Tuesday to help unload cargo stranded on the troubled shipper's vessels, a spokesman said, but regulators warned securing further funds could take "considerable time". The parent of Hanjin Shipping pledged last week to raise 100 billion won to help rescue cargo in the wake of the collapse of the world's seventh-biggest container shipper, including the 40 billion won from Chairman Cho Yang-ho.

In light of the recent bankruptcy filing by Hanjin Shipping, The Port of Virginia has updated its policies and processes regarding the movement and loading of Hanjin vessels and containers. The following policy is effective as of Sept. Line onto a Hanjin vessel. Line vessels. These restrictions were requested by Cosco Container Lines, "K" Line, Yang Ming Line and Evergreen Line, which with Hanjin, compose the CKYHE shipping alliance. After careful consideration, the port agreed today to comply with the request. Beginning Aug.

Effective immediately, The Port of Virginia will not be accepting any inbound Hanjin cargo (freight for export) at any of the port’s marine or intermodal terminals. The port, however, will accept empty Hanjin containers at the PPCY. Further, the port is developing plans for how to handle Hanjin cargo that is already on-terminal. Those plans will be communicated to all port customers, users and stakeholders as soon as they have been finalized. This decision, said John F. Reinhart…

Hanjin says asks court for its assets to be frozen; Hyundai Merchant looking to buy Hanjin's "good" assets. South Korea's Hanjin Shipping Co Ltd filed for court receivership on Wednesday after losing the support of its banks, setting the stage for its assets to be frozen as ports from China to Spain denied access to its vessels. Banks led by state-run Korea Development Bank (KDB) withdrew backing for the world's seventh-largest container carrier on Tuesday, saying a funding plan by its parent group was inadequate to tackle debt that stood at 5.6 trillion won ($5 billion) at the end of 2015.