Teekay LNG Partners, part of the Teekay Corp group of companies, said on Thursday it had been asked to accelerate the delivery of an LNG tanker with Arctic credentials for the Yamal LNG project operated by Russia's Novatek.Yamal LNG project had ordered 15 ARC7 ice-class LNG tankers as the liquefaction plant ramps up productionFour ARC7 tankers had been delivered by the end of last year, including the Boris Vilkitsky, Fedor Litke and Vladimir Rusanov, which have been transporting LNG from Yamal since the start of operations at the end of last year"The Yamal LNG consortium has asked us to deliver our second ARC7 LNG carrier earlier than the scheduled November 2018 date…

International law firm Watson Farley & Williams LLP (“WFW”) advised long-standing client Teekay on the successful completion of financing initiatives for Teekay Corporation and Teekay Offshore Partners LLP (“TOO”). This included assisting TOO on US$400m of secured bank financing and the raising of US$200m in fresh equity capital along with the deferment of certain bond maturity dates, whilst parent company Teekay Corp completed US$350m of bank financing and raised a further US$100m in equity capital.

A new shipping company has established itself in Vancouver as the Vancouver International Maritime Centre (VIMC) completes its Asia tour, launching in Tokyo, Singapore and Hong Kong. Greystoke Marine Management Ltd. is the latest company to choose Vancouver for its base of operations. The company focuses on assisting global shipping investors and international owners with optimally managing their portfolio of assets. Greystoke’s founders Robert Hedley, Mads Meldgaard and Roy Spires are all former shipping executives with one of the world's largest energy transportation providers, Teekay Corp. “Greystoke is a great supporter of the Vancouver International Maritime Centre initiative and Vancouver was an obvious location to start our new company,” said Co-CEO Robert Hedley. 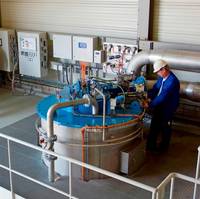 Wärtsilä to supply a combined inert gas generator & gas combustion unit for 2 new liquefied natural gas (LNG) carriers being built at the DSME yard in South Korea for Canada-based Teekay Corp. The concept of combining the two systems was developed by Wärtsilä in cooperation with DSME, and the system burns the boil off gas using an already existing Wärtsilä Moss inert gas generator. In so doing, it eliminates the need for a conventional gas combustion unit thus providing capital expenditure savings for the customer. Delivery of the Wärtsilä equipment is scheduled to begin in autumn 2014.

According to an April 19 report from Bloomberg, Teekay Corp., a Hamilton, Bermuda- based owner of oil tankers, will expand its fleet serving in Brazil to take advantage of the country’s rising offshore oil production. The company has 11 shuttle tankers in Brazil and operates 35 of the tankers globally through its subsidiary Teekay Offshore Partners LP. (Source: Bloomberg)

According to an analyst speaking with the Associated Press for a Feb. 9 report, a flood of new crude oil tankers being delivered this year will bring down vessel rates in the spot market and he has cut his ratings on two companies. Jefferies & Co. analyst Douglas Mavrinac downgraded Overseas Shipholding Group to "Underperform" from "Hold" and lowered Teekay Corp. to "Hold" from "Buy," noting both companies have a large portion of their fleet operating in the spot market, where rates are expected to slip. (Source: Associated Press)

Oil tanker operator Teekay Corp. said Tuesday it will increase its quarterly dividend by 15 percent to 31.625 cents per share, from 27.5 cents previously. The dividend will be paid on Oct. 31 to shareholders of record on Oct. 17. The Bermuda-based company also said it will repurchase $200 million of its shares, or about 14 percent of shares outstanding based on Monday's prices. Share repurchases take a company's shares out of circulation, boosting profits that are measured on a per-share basis. Teekay shares rose $1.38, or 7.1 percent, to $20.80 on Tuesday. They're still near the low end of their 52-week range of $18.50 to $60.46. Source:  Forbes

Two ships carrying liquefied natural gas are bound for the LNG terminal in , according Bloomberg News. Suez SA's Suez Matthew is due in and is carrying 126,540 liquefied 4.47m cubic ft. of gas, the data show. The ship has a 65,674-ton capacity and most recently docked in , . Teekay Corp.'s Catalunya Spirit is due in on Aug. 3 and most recently sailed from . The ship is carrying 138,188 cubic meters of liquefied gas and has a capacity of 77,204 tons. Source:  Bloomberg