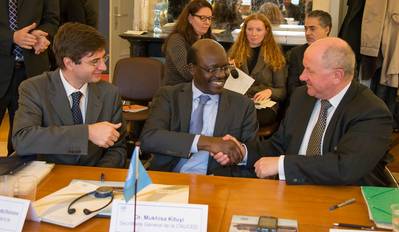 The Marseilles Fos port authority has signed a five-year renewal of its agreement with the United Nations Conference on Trade and Development (UNCTAD) to provide management training for ports in French-speaking Africa.

The collaboration dates from 1996 and runs within UNCTAD’s Train for Trade program. Under the scheme, every two years the leading French port hosts a training visit attended by some 20 directors and senior managers from African ports. Through seminars and a mutual exchange of ideas and experience, the schedule aims to help delegates enhance training capabilities at their own ports.

The 2014-18 agreement was signed in Geneva by Marseilles Fos managing director Jean Claude Terrier and UNCTAD secretary-general Mukhisa Kituyi. They were joined by Nicolas Niemtchinov, France’s permanent representative at the UN Geneva office.

Observers at the ceremony included the ambassadors from Benin, Congo, Haiti, Mauritania, Senegal and Togo, together with representatives from Democratic Republic of Congo, Djibouti, Gabon, Guinea, Ivory Coast and Madagascar.

As a signatory to the scheme through its Institute of Training, the Marseilles Fos authority is formally recognized by UNCTAD as an active partner and point of reference for port expertise.