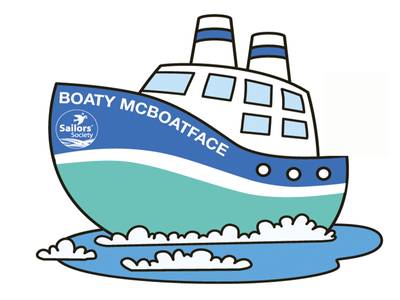 Though the U.K. Natural Environment Research Council decided not to name its state-of-the-art polar research ship Boaty McBoatface (instead opting to name the ship David Attenborough, and calling its remotely operated undersea vehicle Boaty McBoatface), the name lives on.
Another Boaty McBoatface will set sail virtually from Southampton today thanks to an initiative from international maritime charity Sailors’ Society and vessel tracking website MarineTraffic.
The virtual Boaty will visit locations where Sailors’ Society has port chaplains and ship visitors, such as Cape Town and Odessa, with the aim of raising awareness about the sacrifices made by the world’s 1.5 million seafarers.
Stuart Rivers, Sailors’ Society’s Chief Executive Officer said, “Although there is a fun element to Boaty, the message behind it is a more serious one. Seafarers make huge sacrifices to transport 90 per cent of the world’s goods; seeing the distance Boaty travels will highlight how they can face months of isolation.”
Seafarers typically spend 270 consecutive days at sea away from their families, and face challenging conditions, loneliness and the threat of piracy.
In the last year, Sailors’ Society and MarineTraffic have worked together to produce two apps that improve seafarers’ welfare .The Ship Visitor app enables port chaplains and ship visitors to deliver more effective care to the world’s seafarers.
In April, the Society launched its Wellness at Sea app, which puts health and wellbeing at sea in seafarers’ hands. The app seeks to combat issues such as fatigue, poor mental health and stress, which affect seafarers on a daily basis and can be the difference between safe transit and a major incident.
Boaty’s progress can be tracked at www.marinetraffic.com or via Sailors’ Society Wellness at Sea app, which can be downloaded for free on the Google Play and Apple stores.