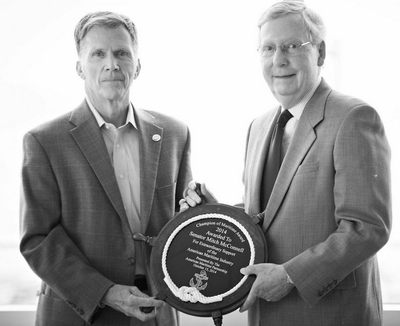 Stephen Little, President and CEO of Paducah, KY based Crounse Corporation presents the Champion of Maritime award to Senator Mitch McConnell, who noted the huge impact America’s domestic maritime industry has in his home state of Kentucky.

Today, Sen. Mitch McConnell (R-KY) was named a Champion of Maritime by the American Maritime Partnership (AMP), the voice of the domestic maritime industry. As U.S. Senate Minority Leader, McConnell has consistently supported the critical role the domestic maritime industry and the Jones Act play in America’s national, economic and homeland security.

“America’s maritime industry is critical to our nation and to Kentucky, which is home to over 13,000 maritime jobs,” said McConnell. “As a long-time supporter of our inland waterways industry and the Commonwealth’s inland waterways infrastructure like Olmsted Lock and Dam and Kentucky Lock, I was proud to help guide the recent WRDA bill through the Senate and into law this summer.  I am honored to be named a Champion of Maritime by the American Maritime Partnership here in Paducah, the heart of Kentucky’s inland waterways industry, and I will continue to advocate on behalf of Kentucky’s maritime jobs.”

Kentucky’s maritime industry transports more than 43.8 million tons of water cargo each year, including coal, lignite, and coal coke, which make up more than 44 percent of the total cargo moved. America’s domestic shipbuilding industry also plays a key role in Kentucky’s economy by providing more than $291 million annually in economic impact as well as more than $187 million in worker income.

“Senator McConnell knows first-hand the important role American maritime and our inland waterways play in moving freight into and out of our nation’s heartland,” AMP Chairman Thomas Allegretti said.  “We are especially grateful for his strong support of our industry’s role in the nation’s multimodal transportation system and his recognition of the Jones Act as the foundation of a bright, vibrant and essential contributor to our country’s national, economic and homeland security.”