A Valuable Tool for Flow Measurements 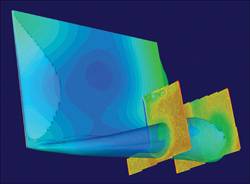 Stereo Particle Image Velocimetry (PIV) is an advanced measuring technique for obtaining 3D velocity information in a plane. PIV can be used to investigate the spatial structure of a flow by efficiently measuring in multiple planes. It is an important tool for the experimental validation of CFD calculations and for obtaining flow field information. This information can then be used for appendage or propeller design for instance.

This technique is based on the measurement of the displacement Dx of particles in a target plane between two successive light pulses with a time delay. The flow is seeded with particles and the target plane is illuminated with a light sheet. Particle positions are recorded by two special digital cameras. One PIV image consists of two image frames belonging to the two successive light pulses. Special image processing software analyses the movements of the group of particles in subsections of the PIV image using correlation techniques. The output is an instantaneous velocity field in the measuring plane. The third velocity component, perpendicular to the measuring plane, can be derived by using two cameras in a stereoscopic arrangement. Therefore, this method is called stereoscopic-PIV or stereo-PIV.

Over the last five years MARIN cooperated with Sirehna in the field of PIV, using a shared system. To make PIV more interesting for customers, MARIN invested in a new system and last September, successful acceptance tests were performed. Designed by DANTEC, the new MARIN stereo-PIV system draws on experiences with the previous system and it is based on the very latest developments. A powerful 200 mJ laser and high-resolution four-Megapixel cameras are mounted on one rigid probe. The new system is optimized for efficient use in a production environment and is permanently installed at the towing carriage. Special effort has been put into reducing the time required for set-up and for calibration, therefore making the PIV system very cost-effective. The new system has already been successfully used for several projects in recent months.

To demonstrate the strengths of PIV, as well as the CFD capabilities, one of the projects performed with the previous system will be discussed in more detail.

PIV measurements were performed in MARIN’s Deep Water Towing Tank on a surface piercing flat plate. MARIN carried out these benchmark tests as part of the HydroTesting Alliance (HTA) project. HTA is the European FP6 Network of Excellence set up to facilitate the continuation of world leadership of the European hydrodynamic testing facilities. The objective of this alliance is to develop a  formal and lasting structure to coordinate the definition and introduction of novel measurement techniques for ship model testing.

The flat plate was selected as a benchmark geometry by the HTA and was towed at an incidence of 20 degrees, while  measurements were made at a plane next to and in the wake of the plate. Although a simple geometry, a lot of important phenomena such as vortices, velocity gradients, free surface deformation and wall surface reflections are present. This benchmark test gives insight into the state-of-the-art stereo- PIV capabilities in different testing facilities.

The advance of computational techniques allows hydrodynamicists to obtain flow fields numerically as well. Therefore, a separate numerical exercise using the viscous-flow solver FreSCo to predict the flow around the flat plate was performed. FreSCo is a URANS solver for general hydrodynamic purposes. Availability of the measurement data and the computed data provides a unique chance to crosscompare both experimental and computational results. The calculation was conducted using the same conditions deployed during the measurement tests. The only simplification made was the neglect of the deformation of the free surface. The location of the measurement plane relatively far from the free surface and the moderate velocity justify this simplification. Careful comparisons between the predicted and measured velocity fields show that they concur very well. The magnitude and position of the vortex sheet coming from the lower edge of the plate are well resolved. Both the PIV system and FreSCo, are valuable tools for future projects.

About the Author: Michiel Verhulst is project manager at the Ships department of MARIN, the Maritime Research Institute Netherlands. MARIN offers simulation, model testing, full-scale measurements and training programmes, to the shipbuilding and offshore industry and governments. For more information: m.verhulst@marin.nl  / www.marin.nl.