Measuring Shipping Emissions in the Arctic 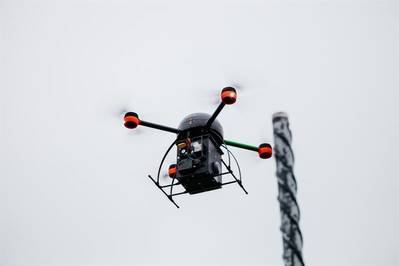 Shipping must prepare for stricter black carbon emission regulations; Finns improve the reliability of international measurement techniques
A new global challenge and a compliance monitoring market are emerging, due to tightening environmental regulations. VTT Technical Research Centre of Finland Ltd, the Finnish Meteorological Institute, Tampere University of Technology and the University of Turku have joined forces in an international project – Shipping Emissions in the Arctic – with the aim of making the measurement of black carbon emissions from shipping more reliable. The initial results show that engine loads and fuel types have a major impact on black carbon emissions from ships.
Pressure is mounting, because no common international environmental targets have been set for reducing black carbon emissions from shipping – and no standardized measurement techniques have been developed. Incomplete combustion generates soot containing black carbon, which warms the atmosphere and causes health problems. “A reliable method of measuring black carbon emissions from shipping is sorely needed, now that the IMO (the International Maritime Organization) is evaluating the need to control such emissions, but no reliable measurement technique has been identified,” said Research Team Leader Jukka Lehtomäki of VTT.
Alongside the Finnish Meteorological Institute, Tampere University of Technology and the University of Turku, VTT is seeking a straightforward and reliable way of evaluating and measuring black carbon emissions from ships, through the two-year 'Shipping Emissions in the Arctic' project launched in early 2015. “The initial results have already revealed critical parameters in the measurement of black carbon; such parameters can be used to achieve more reliable results. Engine loads and fuel types had a major impact on black carbon emissions from the engine we studied”, explained Principal Scientist Päivi Aakko-Saksa of VTT.
The study will enable preparations to meet tightening international environmental regulations. Finnish businesses and industry can prepare now, by investing in research and development and new business activities. More precise information on the emissions impact of different fuel types is helpful for developers of fuel and engine technology. The results can also be used to improve the accuracy of ship emission models and global emission inventories.
From an engine laboratory to a real ship
Last autumn, emission tests were performed at VTT’s engine laboratory in Espoo, using a 1.6-megawatt diesel engine which corresponds to a typical auxiliary ship engine. The test matrix was extensive enough to make the results internationally applicable. Four marine fuels were tested, of which three contained varying amounts of sulphur (0.1 percent, 0.5 percent and 2.5 percent), whereas an oxygen-containing bio-component accounted for 30 percent of the fourth fuel. The next step will be to validate the results in a real ship equipped with the latest technology, including a desulphurizing exhaust scrubber. The project also explores the business potential of emission measurements. In addition, the engine measurement tests leveraged the results of another measurement technology research project – HyperGlobal; a multicopter equipped with sensors was used to measure sulphur dioxide levels in the vicinity of a exhaust pipe during the tests.
The critical examination and measurement of maritime black carbon emissions is made all the more urgent by the fact that black carbon is a major contributor to Arctic warming. New shipping routes are opening up due to the melting ice caps, which will prove detrimental to the climate as emissions from shipping extend to the highly vulnerable Arctic region. Even small deposits of black carbon accelerate melting and climate change, by reducing the reflectivity of snow and ice.
VTT’s 'Shipping Emissions in the Arctic' project is part of the Tekes 'Arctic Seas' program. With a budget of EUR 700,000, the project was launched in January 2015 and will end in December 2016. VTT’s partners in the project include the Finnish Meteorological Institute, Tampere University of Technology, the University of Turku, Wärtsilä Finland Oy, Pegasor Oy, Gasmet Technologies Oy, VG-Shipping Oy, Port of HaminaKotka Ltd, Oiltanking Finland Oy, Kine Robot Solutions Oy and VTT’s spin-off Spectral Engines Oy. AVL List GmbH from Austria also assisted with the measurements. The multicopter project was coordinated by Aeromon Oy as part of the HyperGlobal project, which belongs to the Arctic Seas program.