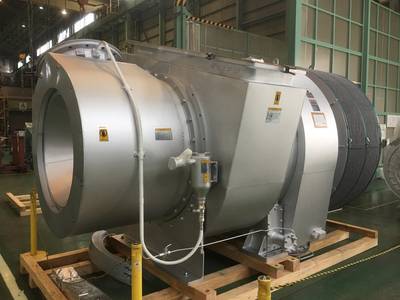 A ceremony to unveil the project's first completed unit will be held on December 2 at a CMD, where the engine was built.

According to MHI-MME, the combination of the MET Turbocharger with the 12X92DF engine achieves the uniform lean combustion of gas mixed air in the engine. At the same time, the effective utilization of the exhaust gas enables both cleaner emissions and high efficiency. It makes it easy to meet International Maritime Organization (IMO) nitrogen oxide (NOx) and sulfur oxide (SOx) emissions regulations, while also reducing carbon dioxide (CO2) emissions with the contribution changing the fuel from diesel to dual fuel.

The IMO's NOx Tier III standards, which require an 80% reduction in NOx emissions from Tier 1 standard, have been in effect since 2016 in Emission Control Areas (ECA). The waters subject to these standards are expected to expand going forward. As for SOx, in addition to the ECA where strict emissions regulations are already in effect, the requirements will be intensified in all other waters from 2020, reducing the allowable sulfur content in marine fuels from the current limit of 3.5% to 0.5% or less.

MHI-MME developed new models of small, lightweight and high-efficiency turbochargers in 2018, aiming to complete the first such turbocharger in 2020. The MET-MBII turbocharger series are available to install the turbocharger on WinGD diesel engines as well as former MET-MB series.

The nine 23,000 TEU mega vessels will be built at a shipyard under the China State Shipbuilding Corporation (CSSC) group.