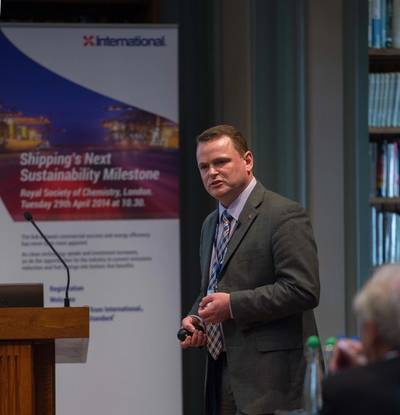 Based on nominations from leading stakeholders within the voluntary carbon markets, the prominent award recognizes the efforts of AkzoNobel and development partners The FReMCo Group and The Gold Standard Foundation.

The first of its kind within the shipping industry, the carbon credits methodology is based on ship owners converting existing vessels from a biocidal antifouling system to a premium, biocide-free advanced hull coating such as AkzoNobel’s Intersleek, part of the company’s International range of marine coatings.

Intersleek coatings are proven to increase a vessel’s operating efficiency and reduce CO2 and associated emissions by an average of 9 percent. Carbon credits are awarded based on the reduction in emissions, which can then be sold on the carbon markets.

“This award is recognition of the hard work and commitment from everyone involved in developing the carbon credits methodology,” said Trevor Solomon, Intersleek Business Manager for AkzoNobel’s Marine Coatings business. “We see this as adding further credibility to the initiative, which has seen a significant uptake in ship owners enrolling in the last year.”

In the first round of claims, two ship owners are due to be awarded a combined total of nearly $500,000 for 17 vessels in 2015. And based on the 100 eligible vessels already converted from a biocidal coating to the Intersleek range, there is a further estimated $2.8 million available for ship owners and operators.