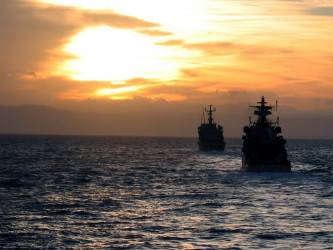 Italian navy and coastguard vessels have rescued around 1,800 more people from boats in rough seas off Sicily, authorities said on Friday, as the chronic migrant crisis continued around the southern island.

More than 20,000 migrants have arrived by sea in Italy though North Africa and the Middle East so far this year, adding to a movement of people which has intensified since the "Arab Spring" upheavals of 2011 and the civil war in Syria.

The Italian navy said a coastguard patrol aircraft spotted several boats in difficulty in the waters between Sicily and Tunisia on Thursday and a number of military and coastguard vessels went to the scene, as well as two civilian tugboats.

The latest arrivals come on top of more than 1,000 migrants picked up earlier in the week.

Italy has struggled for decades with a steady stream of migrants looking for a better life in Europe travelling in small, unsafe boats from North Africa to the tiny island of Lampedusa, midway between Tunisia and Sicily.

But the problem has ballooned since the breakdown of order in Libya opened up new opportunities for people-smugglers.

Italy set up a special marine task force dubbed Mare Nostrum last year after hundreds of people were drowned in two disasters near Lampedusa and has appealed for more help from the European Union to handle the arrivals.

With the approach of European parliamentary elections in May, the long-running emergency has gained increasing political prominence with the anti-immigration Northern League calling for the suspension of Mare Nostrum.