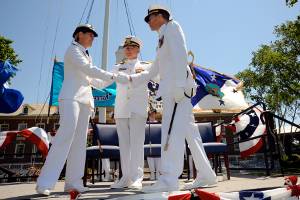 A woman took command of a U.S. military service academy for the first time in history when Rear Adm. Sandra Stosz took over as the superintendant of the U.S. Coast Guard Academy in New London, Conn., Friday, June 3.

“We are extremely proud to be the first service with a woman at the helm of our academy,” said U.S. Coast Guard commandant, Adm. Robert J. Papp. “The Coast Guard has always led by allowing women equal access to all our jobs and assignments.”
Stosz takes over as the school continues to see an increase in minority admissions, growing from 12 percent in 2008 to 24 percent in 2010.
“While historically important, this assignment is really just part of a natural progression in an ongoing process of creating a service environment where our entire workforce can contribute their best and feel they have equal opportunity to do so,” said Stosz. “We'll know the nation has succeeded in its efforts when there are no more firsts like this one and I am remembered as the 40th superintendent of the Coast Guard Academy, not the first female superintendent.”
Under the command of the previous superintendent, Rear Adm. J. Scott Burhoe, the school was ranked as a top college by the New England Association of Schools and Colleges and listed as the number one college in the northeast by U.S. News and World Report. The school had five Fulbright and three Truman scholars during his tenure.
“A diverse Coast Guard ensures we benefit from talents, abilities, ideas and viewpoints of a workforce drawn from the richness of American society; to best serve our country, we should be a reflection of it,” said Burhoe, who is scheduled to retire July 1.
Stosz was responsible for policy affecting the recruitment and training of more than 8,000 Coast Guard reserve members in her last assignment.  She has also commanded the Coast Guard’s only recruit training center in Cape May, N.J. and was the first female commanding officer of a Coast Guard cutter on the Great Lakes, the Coast Guard Cutter Katmai Bay.
Stosz is a 1982 graduate of the U.S. Coast Guard Academy and the first female academy graduate to reach the rank of rear admiral.