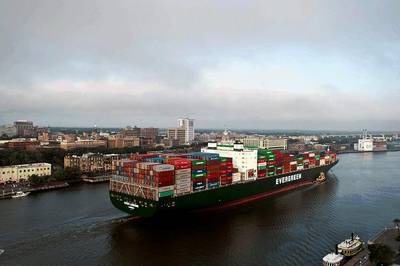 “The board and staff of the Georgia Ports Authority are to be commended for their outstanding achievements this year,” said Georgia Gov. Nathan Deal. “Our ports’ success is a win for us all, and a direct result of Georgia’s commitment to the GPA and support for critical port infrastructure projects such as the harbor deepening and enhanced access to I-95 and I-16. Georgia’s deepwater terminals support jobs, investment and economic development in every county across the state.”

The Port of Savannah handled a record 3.14 million TEUs in FY14, up by 6.3 percent or 186,567 TEUs compared to the previous year. It was the first time for the port to move more than 3 million TEUs in a fiscal year.

The added volume contributed to a record year in total tonnage. In the 12 months ending June 30, GPA moved 29.4 million tons of freight, up by 8 percent or 2.17 million tons.

“Our ports support a broad range of industries, ranging from forestry and food production to auto manufacturing and retail,” said GPA Executive Director Curtis Foltz. “The additional cargo attracted to Georgia in FY14 speaks to the powerful and growing impact Georgia’s ports have on the state and region.”

“There are good reasons more than 21,000 businesses depend on Georgia’s deepwater ports to move their goods reliably and on-time,” said GPA Board Chairman James Walters. “Our unmatched customer service, central location and superior connectivity beyond our ports are what make GPA the Southeast’s hub for global trade.”