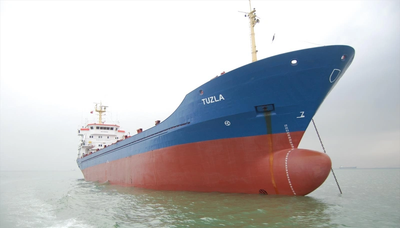 A Turkish-owned general cargo ship was struck by a missile in the port of the southern Ukrainian city of Kherson, sparking a fire, according to video footage from the scene and shipping sources.

Reuters was able to confirm the location from the ships and buildings seen in the video, which matched file and satellite imagery of the area. Reuters was not able to independently confirm the date the videos were filmed.

The ship, which has been stuck at the port since February 2022, was operated by Cayeli Shipping, which was not available for comment.

A shipping source said there are twelve Turkish ships trapped in Ukrainian ports, including in Kherson, that are not covered by the U.N.-brokered Black Sea grain deal.

"There has been an attack yesterday night, most probably to the port, and an explosive charge seems to have hit the ship. Turkish ships in Kherson are manned by a skeleton crew so there are no injuries or casualties," the source said, speaking on condition of anonymity.