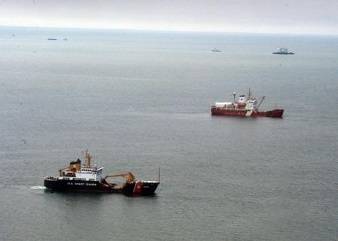 With a stifling heat wave affecting most of the country last week, it’s hard to picture U.S. Coast Guard units focusing on our nation’s Arctic interests. But for a dedicated group of Coast Guard men and women, the Arctic is all that is on their mind.

As the nation’s lead federal agency for ensuring maritime safety and security in the Arctic, the Coast Guard will perform its statutory missions to ensure the Arctic remains a safe, secure and environmentally protected region. After a successful Arctic Shield 2012 operation on the North Slope and Barrow, Arctic Shield 2013 focuses on Western Alaska and the Bering Strait.

This year’s operation will continue the three-pronged approach of outreach, operations and capability assessments.

Operations – Cutters, aircraft and personnel will maintain a presence in the Arctic region and will engage in operations encompassing a variety of Coast Guard missions.
Outreach – The Coast Guard will leverage its partnerships with federal, state, local and tribal partners to combine efforts to ensure the safety of the maritime community.
Capability assessment – Operating in the Arctic will give an opportunity to exercise capabilities to ensure the Coast Guard has the right resources to conduct maritime operations.

As part of Coast Guard Arctic Shield 2013 the forward operating location in Kotzebue was opened July 12, 2013, in preparation for the anticipated increase of maritime activities in Western Alaska and the Bering Strait.

“It’s extremely important that we have a presence in the region to build interagency partnerships and increase our Arctic maritime domain awareness,” added Travers.

The forward operating location consists of a Kodiak-based MH-60 Jayhawk helicopter with supporting air and ground crews and will be based out of the Alaska Army National Guard hangar in Kotzebue.

“We have facilities in locations around the state to meet local, state and federal needs in the event of emergencies or urgent contingencies,” said Major Gen. Thomas H. Katkus, adjutant general of the Alaska National Guard and commissioner of the State of Alaska Department of Military and Veterans Affairs.

“The Alaska National Guard’s hangar in Kotzebue is a great facility that is positioned to benefit multiple users. Tremendous synergy is achieved in sharing this space with the Coast Guard. Our relationship greatly benefits the state while simultaneously providing services and safety assets that better protect and help Alaskans.”

Arctic Shield partnerships continued at the local level with local government and tribal officials in Nome and Kotzebue to discuss the Coast Guard’s continued presence in the region and to address mutual concerns about increased maritime traffic. The Coast Guard Cutter SPAR also engaged with the State of Alaska Department of Environmental Conservation and the Canadian coast guard to deploy a Coast Guard vessel of opportunity skimming system in Port Clarence to maintain crew proficiency with the system and to strengthen the relationship between both services.

For the first time in Coast Guard history, the Coast Guard Cutter Naushon, a 110-foot patrol boat, was deployed to the Arctic to test the cutter’s capabilities and performance in the environment. The crew conducted law enforcement boardings and fisheries patrols in the Bering Sea, Bering Strait, Kotzebue and Norton Sound.
A national security cutter will also be deployed as a command and control platform to conduct various missions to include maritime domain awareness, search and rescue and law enforcement.

Outreach is a key component to all Coast Guard operations and engagements in the Arctic region, and the importance of broadening partnerships is highlighted in the Coast Guard’s Arctic Strategy.

“We understand the importance of strong relationships with tribal and local governments and have directly engaged in more than 50 meetings to discuss subsistence, shipping and other Arctic concerns,” said Ostebo. “We are striving to build and strengthen our relationships throughout the Arctic by participating in open dialogue, actively listening and responding to tribal and local government concerns.”

The district has a dedicated tribal liaison who actively engages with Arctic tribal leaders and local governments to ensure Arctic Shield 2013 operations do not conflict with tribal rights, interests or subsistence activities.

With federal, state and local partners, the Coast Guard’s continues to develop an active, adaptive, fiscally responsible approach to meet the service’s maritime safety, security and stewardship requirements in the Arctic.

Russia plans to begin year-round shipping via the Northern Sea Route that passes through the Arctic in 2022 or 2023, Deputy…