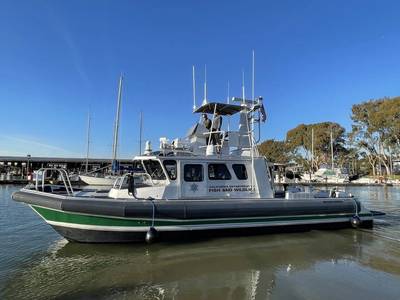 San Francisco Bay Area boatbuilder Moose Boats said it has recently delivered an M1 – 46 to the State of California’s Department of Fish and Wildlife. The vessel is to be named, Chinook and will be based out of Fort Bragg, Calif. to serve as an offshore patrol boat.

California Department of Fish and Wildlife’s vessel specifications called for comprehensive deck and interior outfitting to enable extended operations for Game Wardens while performing enforcement and wildlife sampling duties off the Northern California coastline. In response, Moose Boats integrated Freeman side sliding doors into port and starboard sides of the wide M1 cabin allowing the crew to freely communicate with commercial and recreational boaters as well as serve as secondary ingress and egress for the crew. A custom 24” tall fendering collar profile allows the M1-46 catamaran to make contact with both high and low freeboard vessels. Game Wardens can retrieve commercial crab traps with an electro-hydraulically operated pot hauler.

Chinook will join California Department of Fish and Wildlife’s other Moose Boats M2-38 Catamaran, called Cabezon, in protecting Northern California’s marine ecosystem and enhancing the safety of its commercial and recreational mariners.