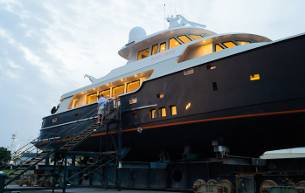 Diverse Projects' latest vessel Black Pearl was launched on 29 December in Whangarei. Pre-dawn rituals of Takahi (Maori waka launch traditions) and a blessing ceremony started at 5am, followed by the actual launch just before high tide at approximately 2pm. The Diverse Projects team of contractors will now complete finishing touches to the interior of the boat and commence sea trials and system commissioning. Celebrations for the official handover and christening will be held in Auckland on January 22, before the vessel heads off on her maiden voyage in February 2011. The sleek, dark hulled 103 ft displacement yacht was designed by Lomocean Design with interior by Chris Connell, and has been in Whangarei for finishing, after construction took place in Palmerston North. Powered by two Caterpillar engines, C18 ACERT rated to 600 hp will allow her to cruise at 12 knots.