Multicat Made from Scaffold 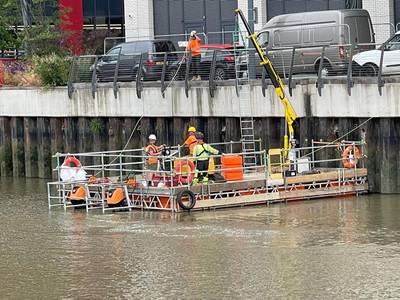 A self-propelled pontoon made entirely from standard scaffold components and fitted with a crane has been used for a project on the river Thames to install ladders, chains, and wooden fendering.

This project sees yet another evolution of the ScaffFloat system that launched in the UK just two years ago. The Cornish-based company has grown across multiple markets and this latest addition of a crane to their self-powered pontoons has some in the industry likening it to the popular multicat style workboats.

A 2.8tm crane that can lift 600kg at 5m was fitted to a custom-made steel crane base. This was designed in accordance with Lloyd’s Register Code for Lifting Appliances in a Marine Environment, July 2021 (CLAME, 2021). After NDT testing it was then LOLER tested once fitted to the ScaffFloat, and a full stability assessment was provided in line with relevant IMO (International Maritime Organization) standards.

The ScaffFloat was also surveyed and licensed by the PLA (Port of London Authority) as a commercial vessel prior to commencing works.

Toby Budd, MD and Founder said, ''We started off with simple pontoons that could be used for access. Then we added outboard pods to the pontoons turning them into workboats, suddenly they became much more useful to our customers and now 90% of our hires go out as a 'vessel'. We then added spud legs, deck winches, and other bolt-ons to add further value. But there is no doubt that it is the addition of a knuckle boom crane that marks the biggest advance in the system from an engineering perspective. Lifting is a key component for most marine works and I am delighted we can now offer this to our customers''.

The company is now developing a crane base for larger projects and expects to soon offer a 7tm crane on their larger 750mm beam system.

The ScaffFloat was on hire for almost two months to GPS MACS who are a specialist marine contractor on the Thames. The ScaffFloat package provided the perfect tool for the job, it also had the benefit of very low draft (just 0.3m) and could be dried out on the steep mud banks giving the workers a much larger tidal working window than more traditional vessels that would not have been able to ground out.