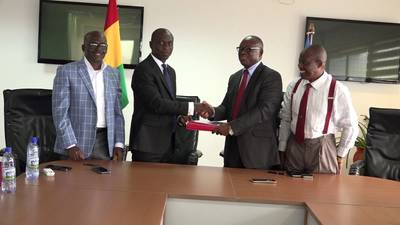 The Ghana Ports and Harbours Authority (GPHA) has offered a concession to  IBISTEK Limited, a Ghanaian firm towards the development and operations of a container and multi-purpose terminal at the Port of Takoradi.

This is part of the Port Authority’s Master Plan and development efforts to equip the Port of Takoradi for future demands.
The concession related project works and installations will be executed at a cost of $370million. The terminals, in the long term, could have the capacity of handling One Million Twenty Equivalent Unit (TEUs) containers in line with the GPHA’s projected growth for cargo through the Port of Takoradi. The concession term is 25years.
According to IBISTEK Ltd, funding for the facility is expected to come from various lending agencies to be led by the African Development Bank (AfDB). There are also intentions to approach the Ghana Infrastructure Investment Fund (GIIF) to participate in the financing.
The acting Director General of GPHA, Paul Asare Ansah revealed that, the project is also anticipated to create over 2,000 direct and indirect jobs.
According to the GPHA Boss, what made IBISTEK stand out is its courage to leverage investments and the ability to confront risk.
The Ag. DG of GPHA further noted that the project is intended to make the Port of Takoradi more competitive with other ports in the sub region and to play a pivotal role in Ghana’s economic development process.
GPHA has already contracted major loans to prepare the basic port infrastructure for such development prospects.
Considering the relatively low cargo throughput for the Port of Takoradi, this project should be seen as a national development agenda for accelerated growth of trade volumes through the Western Region.
“It is a good step that we have taken for the Port of Takoradi and it is a project that will uplift the status of Takoradi Port to compete favorably with other ports in the sub region. Takoradi Port will position itself as the gateway for development into the western parts of Ghana.
The Chairman and Director of IBISTEK Limited, Kwame Gyan expressed his excitement about the project and confirmed their commitment to deliver on this flagship project.